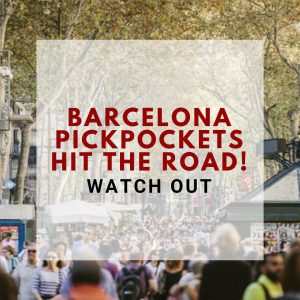 This almost happened to me...

While the typical conception is that the Barcelona pickpockets roam areas such as Passeig de Gracia and Rambla Catalunya, along with other touristic hot spots and the metro, there are occasions were organized groups of pickpockets in Barcelona will try to part you of your valuables while you are on the road, be it in the city or on the motorway (yes it has happened on the motorway!!). But don’t worry! This is nothing like the stories you hear from Mexico City and after reading this real life experience you should be able to easily avoid such traps.

Again, this almost happened to me…

In 2005, my family and I drove down to Barcelona for our summer holidays. One evening on our way home a guy on the scooter, driving alongside us got our attention by honking his horn repeatedly. His left arm was pointing towards the rear of our car, and in a matter of seconds it become evident what he was pointing at…the right tire in the rear had deflated! Why so quickly? Two weeks earlier a good family friend told us how he was robbed while driving a rental car in Barcelona…thanks to his accounts we were able to avoid the same fate… As soon as we were aware of the situation we decided to attempt to creep the car forward as far as possible, in an effort to derail the Barcelona pickpockets' plans. We pulled up at the next possible parking space and made sure the doors were locked. At this point, what the guy on the scooter and the rest of his group of Barcelona pickpockets expect (there was a car that stopped suspiciously in the middle of the nearest side road behind us, we assume was part of a getaway plan), is that you unknowingly exit the vehicle and check out the damage, providing them with the window of opportunity to access your vehicle from the other side and take with them everything they can get their hands on. Fortunately enough for us, and less fortunate for the pickpockets in Barcelona, we knew of the trick, thanks to our friend. We didn't fall for it, but it took the scooter guy quite some time to understand. He drove around on the pavement for a while trying to get us to come out before poorly attempting to hide behind the corner… We stayed put. Only after at least 10 or 15 minutes did the scooter guy give up and leave.

Watch out for scooters at traffic lights!

Then we managed to change the tire, while securing the car. The flat tire had a stab mark 2 cm in length! The guy on the scooter created the problem he wanted to help solve so politely, probably at the last traffic light stop! The police didn't even show up after this whole event. But that's the Spanish or Barcelona police for you.  This probably happens quite frequently and sadly there's not much they can do about it.

This is what happened the next day...

We went to the garage the very next day to get a new set of wheels. We told the mechanics of our encounter with these pickpockets in Barcelona, and another customer who overheard our conversation couldn't believe it, because something similar happened to him just hours before… He was driving on the motorway and the similar proceedings unfolded: somebody points out an apparent problem, this time they were pointing at the engine of the car. This guy, however, was on the phone and he clearly didn’t need even more distraction from these Barcelona pickpockets. He pulled up on the emergency lane, got out and had a check around the car, while still on the phone, and before he knew it somebody pulled up behind him, got into his car and sped off. He was left on the motorway without a car! But he was lucky, if one can say so, to be left there with his mobile phone…

How can you prevent something similar from happening to you?

The short answer: you can’t. Traffic in Barcelona is mad. Unless you mount cameras or motion detectors inside your tires, it is pretty much impossible to detect. It is, however, useful to know the following: Pickpockets in Barcelona love tourists. And this also applies to the road: Barcelona pickpockets especially love targetting cars with foreign license plates and rental cars. Bear that in mind, and you will only lose a tire. So now that you know, watch out for those traps by these creative Barcelona pickpockets! Hopefully this hasn't happened to you yet. Have you experienced a similarly unusual (attempted) robbery that can top this? Tell us, we’d love to know!