BEER IN BARCELONA: WHAT SHOULD YOU TRY! 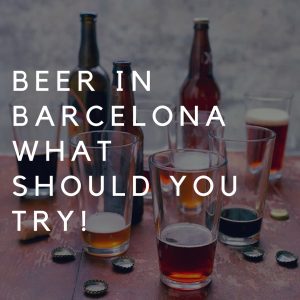 Beer in Barcelona : The Best From The Taps

Draft beer in Barcelona? You would think that Barcelona sounds like a drinker's paradise with cava, sangria, mojitos, vermouth, etc... But about beer, I was not so sure. The big Spanish brands like San Miguel or Estrella Damm have never seemed as good to me compared to other breweries in Europe. Most restaurants, bars and pubs serve beer but the options are limited. In Barcelona, I realized that there are very few bars/pubs offering actual beers on tap that aren't one of the commercial brands. Don't worry though! We've taken it upon us to thoroughly investigate the situation and we will show you the best of draft beer in Barcelona. If you are a cocktail-lover, don't miss out our ebook Top 10 Cocktail Bars in Barcelona

This bar has everything you need to have a fantastic late night beer binge: a huge selection in both international and local beer, delicious food, humorous and knowledgeable staff, nice and chill atmosphere,... It seems that 10 taps is not enough for a beer bar, BierCab has 30 taps which you might have not never seen before. The awesome beer selection both in taps and bottles ranges from strong to weak, from dark to light, from all over the world. The prices aren't cheap, mostly around 5-8EUR for a pint, but it is totally worth for trying beer thats beyond the normal standard beer in Barcelona. The bar also serves tasty tapas. When you go there, don't hesitate to try the burgers and patatas bravas. With its funky vibe coming from good music, wooden design, and especially from friendly drinkers, BierCab is a favourite spot for many foreigners and locals alike. Check out their website for more details in drink and food menu. Address: Carrer Muntaner 55

The second spot in our Draft beers in Barcelona list is Ale&Hop. If you want to escape from very crowded breweries, Ale&Hop is the place for you. This cozy bar is an indie brewery of Barcelona par excellence. Ale&Hop is a place where you can listen to underground hits, enjoy cozy ambiance, a hipster feel and especially great beer, which is a mix of high quality offerings from Germany, the UK, the Netherlands, Spain,... With 10 taps and excellent bottles in fridge, Ale&Hop is a must-visit place if you want to get drunk. The price is 3-5EUR for a pint, which is very reasonable for quality beer. Located on a small street in trendy El Born, Ale&Hop is a good late night choice after having a stroll and dinner. The food here is not very special. But if you are veggies, Ale&Hop does very well in serving top notch vegetarian food. Address: Carrer de les Basses de Sant Pere, 10

Another cool gem  in Gothic Quarter is La Cerveteca. It's a shop, a bar and a brewery library. There are always people tasting different beers and perhaps you might not understand their drink list and sometimes strange vocabulary. La Cerveteca is a cultural meeting space that revolves around beer and everything related to it. At La Cerveteca, you will find information on beer culture, brewery events, and craft beers from different origins that become the symbols of the world of beer. Not just only a shop, La Cerveteca is also a drinking spot which offers beer from 13 taps and 100 bottles being selected carefully as well as pretty good tapas. Not like other beer bars/pubs, La Cerveteca should be visited early, because its opening hours are from 18:00 to 23:00. Address: Carrer d'En Gignàs, 25

Cara B is a great little bar in Gracia well off of tourist path. It is shabby but still nice with 10 taps and around 130 bottles of beers mostly from the UK, Belgium and US. It has live music every night from Tuesday to Saturday. The singers and bands bring the intimate feeling to the room. This spot is more for thirty-something plus crowd because Cara B can really remind them of their childhood when you bounce up and down to Twist and Shout and Jumpin’ Jack Flash. There are black and white photos of The Stones, Jackson 5 as well as the vinyl 33 on the walls, which will send you back to an older musical era. When the music isn't live, you can still enjoy your beer listening to the Rolling Stones, the Beatles and so on. Address: Carrer del Torrent de les Flors, 36

The name says it all. CatBar is a little bit different from other Barcelona's draft beers places. Located in El Born neighborhood, this bar is a cat-themed bar, which is surprising and fun. Of course you won't see any real cats in this bar, but you might see some drawn on the walls and some hipsters lovingly referring to their friends as 'cats'. There are 9 craft beers on tap and the staff let you sample somethings before ordering a pint. About food, this dimly lit bar features very good veggie options, especially burgers which I recommend highly. Address: Carrer Boria, 17

The weather is getting colder and colder folks! I hope these cool draft beers places will inspire you and keep you from being lazy and staying at home on the couch tonight. If you still want to know more about other drinking places, make sure to check out our blog Top 10 Rooftop Bars in Barcelona and Unique Bars in Barcelona and let us know if you know of any other great bars that serve draft beer in Barcelona! ~Trang