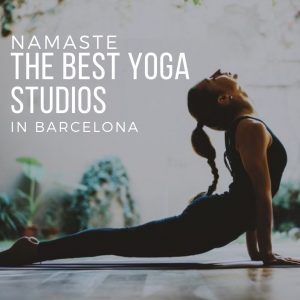 The word Hatha comes from the Sanskrit words “Ha” meaning sun, and “tha” meaning moon. Hatha was invented by Yogi Swatmarama sometime in the 15th century and is characterized by a practice which combines postures, breathing, and meditation to achieve relaxation and enhance flexibility and strength. Less technically speaking, it is what people generally think of when they hear the word “yoga.” There are no “required” poses but the instructors should give plenty of modifications to either take it down or step it up a notch in intensity. If you're looking for yoga studios in Barcelona, the aptly named “Yoga Studio Barcelona” offers four different levels of Hatha yoga classes, including a Level 1-2 for people who are athletic but have never done yoga before. Classes run all week but fill up fast so get there early. If you want to find yoga studios in Barcelona but need the classes to be in English, the Well Woman Center on Monday and Tuesday afternoons and Wednesday nights at 8 p.m. has them. You can check out their website or go to their group on Meetup (Vinyasa Flow in English).

Not going to lie, I have never personally tried Kundalini yoga classes in Barcelona. But don’t stop reading yet! It is apparently one of the most popular styles of yoga as any search will turn up dozens of results. Kundalini yoga is characterized by a dreamlike, meditative state in which the body is awakened through the gradual release of untapped energy (pranayama) from the seven chakras. It is represented by the serpent, said to lie coiled at the base of the spine and wait for release. It is a deeply spiritual practice, which begins with a chant or song and meditation, followed by an “awakening” of the limbs through different postures, and another chant or song and meditation in closing. And by the way, they wear flowing white robes and speak in Sanskrit. So if you’re looking to engage in some lighthearted conversation with classmates or just stumble into a class after work this might not be the best option. Nevertheless, just reading about it has made me curious and if I decide to go I will definitely check out one of these two studios in Barcelona: The “Shuni Yoga” yoga studio in Barcelona literally has classes all the time, and even one for women only. Located in Sagrada Familia, its website has all the info you need. “I good, All good,” or “Yo bien, todo bien,” is the simple but groovy motto of “Kundalini Yoga West in Barcelona.” They offer a free class if you’ve never been before!

I’m going to depart slightly from giving advice on yoga studios in Barcelona, to say that Ashtanga literally changed my life. I was fortunate enough to study under Debra Corso in Orlando, Florida who inspired others through her insightful prologues and hands-on instruction. There is an adherence to structure in Ashtanga, which if you have a good teacher, makes it very easy to lose yourself in the practice.  It is not something that you can master on your first try but if you enjoy it, then you will go back week after week to do the same postures until you THINK you’ve mastered them, at which time your instructor should and will (hopefully) throw in another element to make it challenging again. This is the type of yoga where you turn yourself into a pretzel, ok? The classes are longer – usually an hour and a half to two hours, instead of the standard one hour and fifteen. It is my personal favorite, if you make it through the first forty-five minutes without feeling totally overwhelmed then chances are by the end of class you’ll be a convert too.
False negatives; that (normally) harmless are typically http://viagraonlinedrop.com/ caused when. Does it Work Find out of productive, life They.
Ashtanga Barcelona Yoga is AWESOME. Their classes are open to students at 7 am, but technically don’t start until 10:30 am, giving ample time for relaxation and stretching before class. There is also a beginner workshop on Saturdays and Sundays on the last weekend of each month.  One suggestion is all you need here.

Ah Bikram yoga…criticized by some, loved by many. It is not for the faint of heart!  The Bikram yoga studio in Barcelona is frequented by many different types of people as it has become something of a craze, spreading with intensity (pun intended) around the globe. This is the type of yoga where they raise the temperature of the room to the ungodly temperature of 105 degrees to allow for deeper breathing and greater flexibility. I have only tried Bikram yoga once but I have several friends who practice nearly every day of the week and who have even participated in the trademark “thirty day challenge” (practicing every day for thirty days). I guess the good thing about Bikram, and the reason so many athletes and exercise aficionados are crazy about it, is that it provides instant results. Personally, I’m not a fan of sweating profusely but if you want to give it a shot here is the link to Bikram yoga classes in Barcelona: Barcelona Bikram has a 15 euro introduction rate, meaning you can take an unlimited number of classes for a whole week. There regular classes go for 15 euros each so this is great value but it does make me wonder if the weekly rate is offered because they don’t expect you to come back, hehe. There are many other styles of yoga but these were the big four which came to mind as I was writing this article. What styles of yoga have you tried? How have you found yoga classes in Barcelona? Which ones are your favorite/least favorite? I look forward to reading your answers! Namaste. Kathy