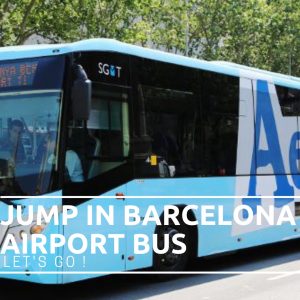 How to get to Barcelona Center from Barcelona airports (and vice versa)? This is a question I was asked many times and I'm convinced the best way is to jump in Barcelona Airport Bus, or shuttle bus. Comfort over price… Barcelona counts one airport, El Prat, labeled BCN, which is the closest to the Center (13km, 8 miles): second largest airport of Spain behind Madrid-Barajas Airport, it is used by more than 30 million passengers each year. After having found your way in the huge terminals (not as big as Paris-CDG though…) following the little signs “taxi”, you can jump in one of the taxis that are queuing outside – go up the line and take the first waiting, that’s how it works! For a price usually between 13€ and 35 € the taxi will take you to practically any point of the city, you and your suitcase. You can also catch the train from the airport, from 6.13 am to 11.40pm, passing every 30 minutes. You don’t have to go out of the airport to find the train station, it’s right in it (like in Geneva)! It will take you to Sants in 17 minutes, Plaça Catalunya, Arc de Triomf or Clot-Aragó in 30 minutes for 2.20€.

And of course, you can take BCN shuttle bus (the most popular means of transportation in Spain, and also the cheapest for long distances): the best BCN shuttle bus according to me is Aerobus 1 (A1) which connects the BCN airport to Plaça Catalunya (the stop is near one of the metro exits, near C/ de la Fontanella). BCN Shuttle bus comes every 15 minutes, runs from 6am till 11.15pm from Pl. Catalunya, from 6.30am till 00.00 from BCN Airport and costs 3.45€. Easy to find, it stops by each terminal. Price over comfort… Reus (REU) and Girona-Costa Brava (GRO) are further away and greet low cost companies (Ryanair’s love story with them is well known…). Lying 100km (60 miles) away from the city center, you’ll have to count around 45 minutes by bus or car to reach your destination (either coming to Barcelona or going to the airport). There’s been some discussion about whether or not those airports should be counted in Barcelona airports, being so distant. If you are ready to endure an hour of Barcelona airport bus, you’ll find a very useful timetable for Girona on Sagales, a Barcelona airport bus company. Just know that for Girona, all buses depart from or arrive at Arc de Triomf, Estació del Nord. A single trip is 12 € and a round trip 21€, no reservation necessary. The Barcelona airport bus running from Reus to Barcelona and vice versa costs about the same amount and departs from the station Sants in Barcelona. The timetable changes frequently, so have a look before anything. Trains also exist, but the best remain Barcelona airport shuttle bus!

Have a nice flight! A.