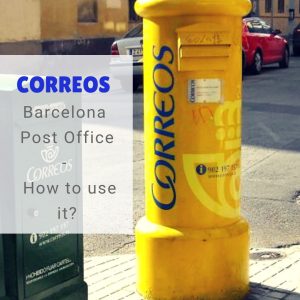 Barcelona Post Office - All you need to know about it!

Barcelona Post Office can be very confusing and scary to an English Speaker,especially if you don't speak Spanish at all or if you have a very limited knowledge about it.  So at SuiteLife we want to make it easier for you to use the Barcelona Post Office by telling you all you need to know.

Barcelona post office, and the Spanish post office (Correos) in general has always had a bad reputation and been widely renowned for slow delivery. However, in recent years, they have had vast improvements.  In Barcelona, the central Post Office can be located on “Plaça Antonio López” near the marina, just at the bottom of Via Laietana, and there are nearly 40 sub-postal offices dotted around the city.  See map .  Most of Barcelona post office have information services, sell stamps and can be used to send and receive letters, packages, telegrams, etc. If you simply want to send a letter then you can buy stamps in tobacco shops, which are all over the city, and then simply post the letter in one of the yellow post boxes spread around the city and outside post offices.  There are also specific boxes for local, national and international letters. At the post office in Barcelona the staff are generally pretty helpful, but if you don’t speak any Spanish or Catalan, it can be a little confusing and difficult.  Most of the Barcelona post offices staff speak little or no English, so you may need to go with a few phrases prepared.

I recently had to send a package to California, and all I could say was that I wanted to send a package to the united states and that I don’t have a box.  It seemed like everything went well.  A nice lady asked me in Spanish which size box I wanted, which I didn’t really understand until she pointed to the selection of different sized boxes.  She then pointed at a section on the box where I need to fill I the address I was sending the package and my own address.  Once I had done this, I went to a man and said I wanted to send the box I had to the United States and asked if I had filled it in correctly, both things I said in very basic Spanish.  He seemed to understand and said that I had indeed filled it out correctly.  I then tried to ask how long it would take for the package to get to its destination, and I asked for the “mas rapido” (quick).  He seemed to understand and proceeded to explain in quick flowing Spanish how the postal service works, which left me pretty confused, and all I could take from what he had said was that he wasn’t sure how long it would take.  So I then asked for the Urgent stamp, which was “mas rapido” and asked how much it was.  It turned out much cheaper than I expected, which could mean it wont be “mas rapido” at all, but the good new is that the package was sent.  A week later I have yet to receive confirmation that the package has reached its destination.

Now you can get through this process with little or no Spanish, but if you don't feel like waving your arms around a lot and trying to express yourself through charades the following vocabulary might make your life a bit easier: I'd like to send this to ________ = Quiero enviar esto a ___________ How fast will it get there? = Cuanto tiempo durará en llegar? Is there a faster option?  = Hay opción más rápido? How much will it be?  = Cuanto será? How much is the fastest delivery option? = Cuanto será la opción más rápido? Is there a tracking number? = Hay número de seguimiento? I want to buy insurance for the package = Quiero comprar seguros por el paquete I need a box = Necesito una caja