THE OKUPA MOVEMENT: THE SQUATTERS OF BARCELONA

The Okupa movement has been gaining momentum ever since the realisation that people could occupy properties freely (and "legally"). It became even more popular after gaining headlines in 1984, when officers rallied into an empty building (in Barcelona) to evict the first ever known squatters in the history of spanish democracy. There is no doubt that the Okupa movement has been rising in numbers due to the impressive amount of vacant buildings in Barcelona. Within this blog, you will find some of the possible opportunities (isn't it obvious? -Higher Profits!!) and complications for investors when buying houses “Okupados” as well as some insight on the possible prevention methods for property owners.

What is the “Okupa Movement"?

Quite simply, an Okupa is a person who seeks empty buildings, taking the opportunity to break in and occupy it. If the incident is reported to the police (which they usually report themselves), they have over 24 hours within the property until it becomes their “own”. The “movement” is more related to the young anti-capitalist figures who occupy the houses in an act to protest their rights. They have created a network in which they have built schools, libraries, accommodation, etc. for young travellers and house seekers. However, there are different types of squatters…

The Different Types of Okupas

The reason behind mentioning the different types of Okupas, is solely to introduce the topic. At the end of the day, if you invest in a property with a squatter, you are investing in an issue that has to be resolved. And so, you would need to have an understanding of the people that could be within the property. Okupa Movement They are usually a young alternative group of people aged 25 to 35 that fight for certain opinions and beliefs. In the eyes of an investor, this type of “Okupa” would be undesirable as it would be very hard to convince them to leave the property through a sum of money. They are strong-minded and stubborn, and tend to group loads of people in one property. 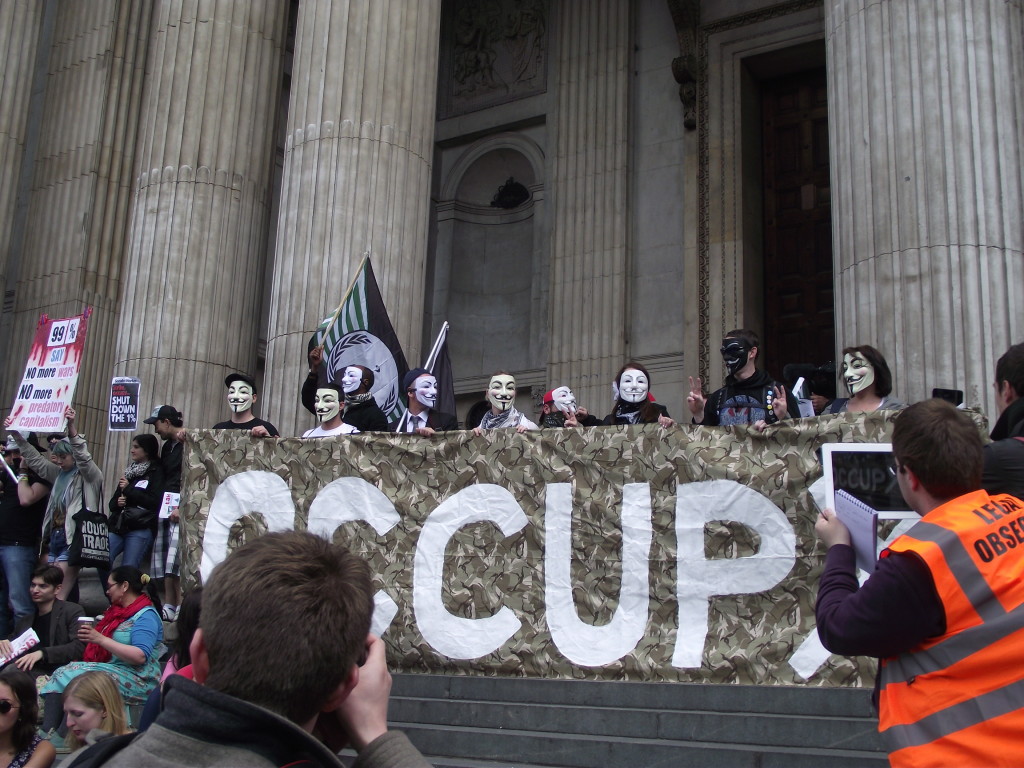 Within the "okupa movement", they have justified various reasons for occupying empty buildings... 1. As mentioned previously, they are strongly against capitalism. They dislike the fact that citizens have to dedicate most of their earnings to a roof over their head. 2.  It is a place to reunite as a collective and survive without all of the capitalist institutions that have been put in place by society. 3. To fight back the banks; they hate how the banks force people into a 40 year mortgage, giving them constant fear that if they lose their job at any point, they could also lose their home. Homeless Bankrupt Families After the crisis, many families found themselves without the sufficient funds to finance their loans; resulting in the banks acquiring their properties. Without any other alternative, families moved in with their parents or they occupied empty buildings to rebuild their home. Some never moved from their property that was acquired by the banks; resulting in another form of occupation. The picture below was taken from one of many of the protests against the "desahucios" (the evictions). "Rescatan Bancos, Desahucian Familias" - They save the Banks, They evict the Families. 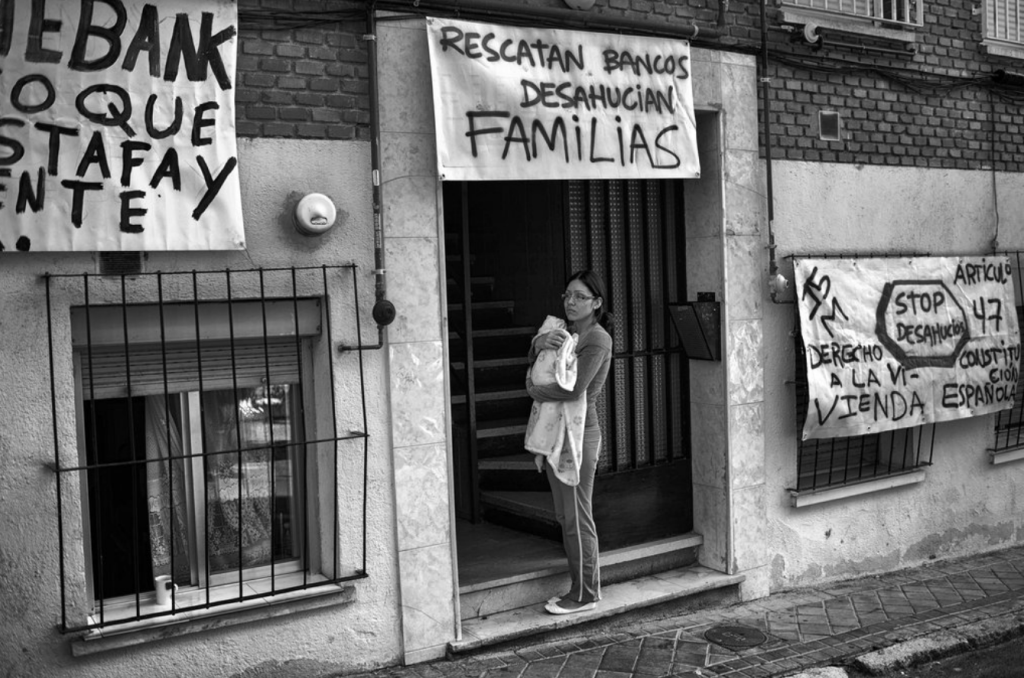 In some part,  this type of Okupa would be the hardest to handle, given that there are huge ethical issues that could arise when evicting these people from their newly found homes. They are not afraid to fight for their home. Nevertheless, with the economy improving, the squatters that you will find in Barcelona will most likely be those from the "okupa movement" or money and con-artists. Money/Con-artists This group of people, purposely occupy empty buildings in a strategy to earn money from the rightful owner. After they successfully occupy the property, the owner would have to pay the squatter in order to convince them to leave... This is preferable to the owner; the legal process to remove a squatter from the property is so tedious, long and expensive that the owner would rather hand the "Okupa" the money outright. And so, these con-artists have been taking advantage of the weaknesses in Spain's judicial system in order to make money. In Spain and in particular, Barcelona, it has become a lucrative sector.

The first ever known "urban occupation" took place in December 1984 in Barcelona. However, the occupation merely lasted a couple of hours as they were thrown out almost immediately by the police. When the attempt came to light,  it inspired many other young Spanish individuals to occupy houses in Pamplona, Bilbao, Madrid and Valencia.  Within this era, the "okupa movement" was largely associated with the "punk" culture that was so popular in the 80's. 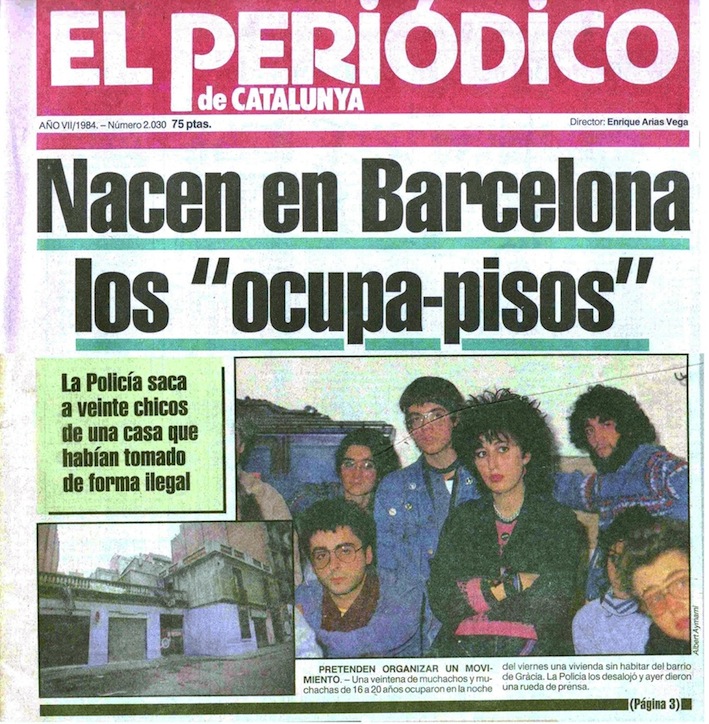 After the first occupation, many other young individuals followed suit. In Barcelona, 1997, they evicted a dozen young individuals from a house that they had named "Casa de los Gatos". The result of which, a few of the police officers were attacked and a total of 40 cars were damaged in an act of rebellion. In 2016, cars were tipped over as the police evicted individuals from the occupied building in Travessera de Gràcia. Most recently, a massive occupation of flats on the street of Sant Francesc de la Llagosta (February 2017) has left many of the property buyers without a home. As you can imagine, this doesn't even surface the amount of occupations and protests that have occurred in the light of the "okupa movement". However, it does give you a taste of how the problem (or opportunity, whichever view you take...)  has risen over time.

This type of selling has increased drastically as a result of the crisis. The banks entered into the real estate market aggressively with a plan to sell houses/properties with squatters or any other complicating issues. There is a clear investment opportunity in purchasing estate with "Okupas", as it would reduce the price of the property by half of its' actual value. This would allow for a greater profit than the usual added-value of a renovation project, for example.  It is true, however, that there is a greater task at hand to remove a squatter from the building than renovating it.  Nevertheless, there are many organisations such as "desokupa" who carry out plans to get rid of these Okupas. That being said, it is a highly risky venture, given that some Okupas may not be willing to move with a simple settlement of money. The Mayor of Barcelona - Ada Colau - is complicating the issue as she is protecting the rights of the squatters. She has made it increasingly harder for organisations such as "desokupa" to pursue the squatters. This means that it is harder to get rid of the squatters; and so,  the owner is left with the option to fight a legal battle or to take the matter in his own hands. There are also some other underlying issues with buying a "okupado" house... For example, you would not be able to visit the property before purchasing it. Also, in some cases, the official size and layout plan of the building could be unknown. This, of course, is what makes this type of venture so risky; but, imagine the sizeable REWARD. How do you approach the notion of buying a property that is occupied? To begin with, you have to distinguish the difference between a legal and illegal occupation... As mentioned earlier, as a result of the crisis, many houses were acquired by the banks, and yet the original owners would remain in the property. And so, they are still technically considered legal occupants of the property, and this would make the process of eviction increasingly harder. However, if a person was to seize an abandoned property, it would be considered illegal. The process of eliminating an illegal occupant will be much easier than a legal occupant. In terms of  "getting rid" of an Okupa, there are some imaginative options: You could use the laws that protect the Okupas in your favour. If you know that the squatters have gone out for the day, you could break in and change the lock to reoccupy the property. Perhaps, you could use a friend to play the role of the "other Okupa". When the original squatters return, to their surprise you have chucked out their belongings and occupied "their" home. When the police arrive, you can present your documents and the squatters will have nothing to show for the possession of the property. If you are interested in investing,some banks have connecting real estate agencies that openly advertise occupied properties on their website. However, for most real estate agencies, it is best not to openly advertise these type of properties. But, Okupa properties are EVERYWHERE. Unavoidably, even some of our listings have been occupied by squatters. Do not hesitate to contact us if you are interested... Because of the nature of these properties, it is best to contact agencies directly to gain more information on purchasing a squatter house.

The Property Owner Perspective: How to Prevent it?

If you own a property in Spain which has been untouched for many years; you should maybe consider taking measures against the Okupa Movement. They have started producing an  "antiokupa" security door in order to prevent them breaking into buildings. With these security doors, you will be able to, at least, minimise the risk of a planned break-in to your empty property in their attempts to occupy it. 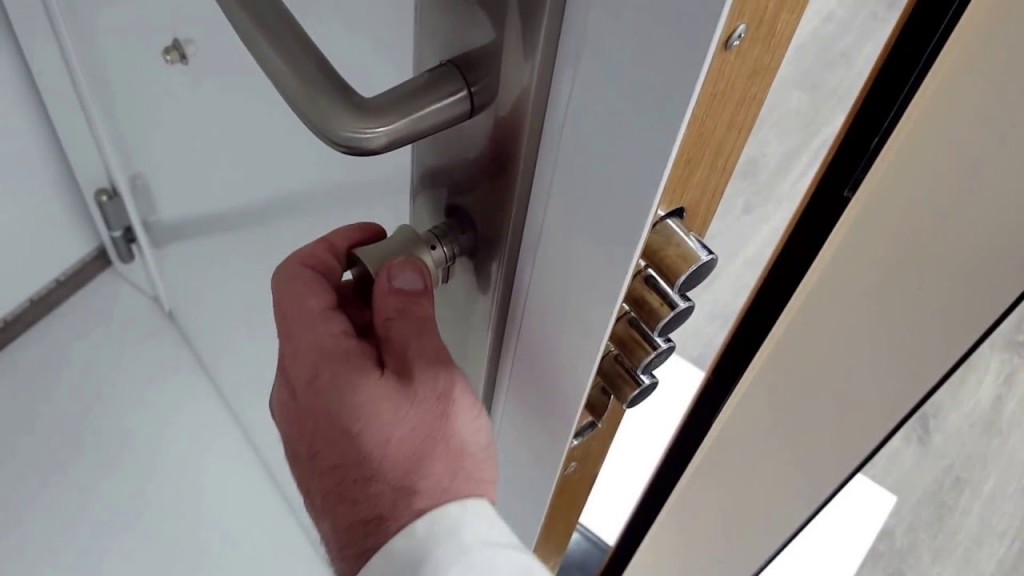 As a property owner, if you want to reassure yourself that your property is completely safe from being occupied, then you could pay for an "antiokupa" security watch service. They patrol around different neighbourhoods with their listings of empty buildings, every 18 to 20 hours, in order to ensure that nobody remains in a vacant property more than 24 hours. If there are any other methods to prevent "okupas", let us know below in the comment section... We hope you have found this blog insightful, The SuiteLife Team. P.S. if you want to know more about Okupa Properties, Contact Us!