We all know that feeling of being lost when moving to another country where you don't understand the language, (been there, done that). If you are moving to Barcelona or Spain soon, and you don't speak Spanish then this blog comes right on time for you, because you are probably going to deal with real estate agencies, this TOP agency is the best in town, or websites like idealista. As we know how complex it can be, we thought of helping you by explain all the relevant Spanish real estate terms that you'll have to deal with when moving to Barcelona or Spain in general. With this blog, you won't run into unexpected surprises!

Let's start with, for some of us, one of the most important parts of the house La cocina: the kitchen. However, there are different types of kitchens. A Cocina Americana is an American style kitchen, meaning it's an open kitchen. A cocina independiente is an independent kitchen, meaning that the kitchen is a separate room. Even though most places have their dining area close to the kitchen, some apartments have a separate comedor: dining room.

Los electrodomésticos are the home appliances. After spending a night full of food and fun with your friends or family, you might not be really in the mood to do the dishes. Solution? the lavavajillas: dishwasher. But to make that delicious dinner you obviously need a horno: oven. Don't want to throw away the left overs? then a congelador: freezer or nevera/frigorífico might come in handy, so you can warm it up next day in your microondas: microwave. If you'd like to wash your clothes at home, than you might also look for a lavadora: washing machine or lavadero: laundry room, and a secadora: dryer. 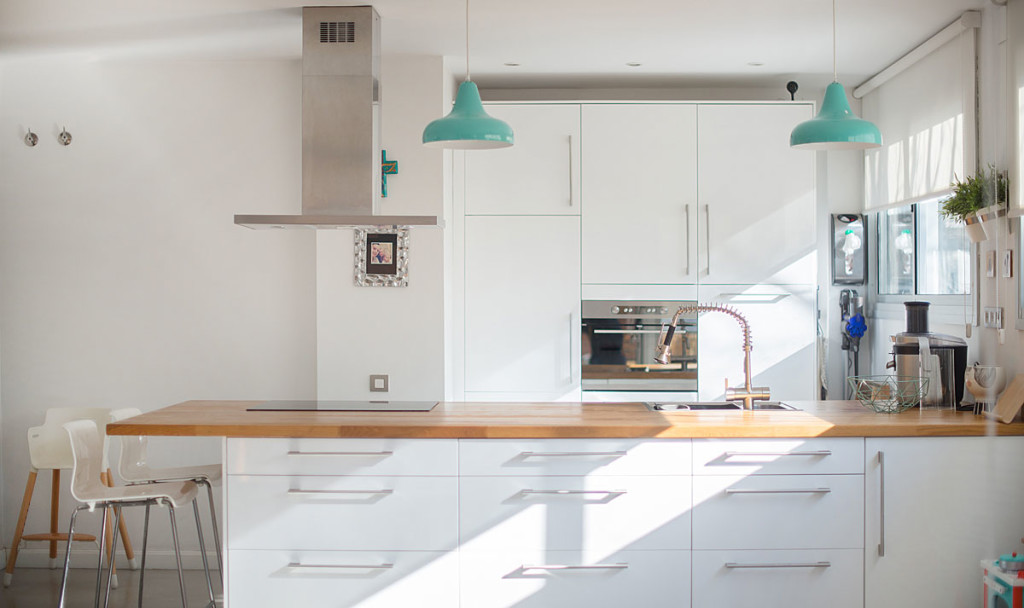 A vivienda is what they call a home in Spanish. In a vivienda you will find habitaciones: rooms, dormitorios: bedrooms, salón: living room, baño: bathroom, ducha: shower. If you have any special wishes you might want to know words like balcón: balcony, to enjoy the summer nights on. As we are settled down in Barcelona for quite a while now, we know how hot the summers can be, so an aire condicionado: air conditioning comes in very handy. However, Barcelona is also known for its' pretty cold winters, so a calefaccion: heating on the other hand is also good to have. Then there are habitaciones dobles which are double bedrooms, and un habitacion individual is an individual bedroom. Want to jump in the shower right after you jump out of your bed every morning? then go for a suite con baño: en suite bathroom, saves time and effort! After a hard day of working you might also want to relax in a bañera: a bathtub. Some apartments might have aseos: a separate toilet, and un despacho: an office. Do you like some extra space to store your mess? then a trastero: storage place is perfect. Since Barcelona has some really amazing views you might even ask for an apartment with vistas al mar: sea views, vistas a la montaña: views on the mountain or vistas a la ciudad: visits on the city. If you wanna have nice visits on the city, then you might wanna look for a nice barrio: neighborhood that provides you these nice views. Wanna live in the heart of the city, but also be close to the beach, your work or anything else? Then ask if the apartment is cerca de transporte público: close to public transport.

This means furnished. If the apartment is amueblado, you will find a sofa: couch, mesa: table, cama: bed, and maybe some armarios empotrados: built-in closets. If an apartment is semi-amueblado it is only partially furnished, if they say sin meubles or no amueblado it is not furnished (there are two types of "unfurnished", with or without kitchen appliances. Unfurnished apartments with the appliances tend to be more common). It might also be useful to know whether there are ventanas: windows, in a room to enjoy the Barcelona sun and luz natural: natural light.

Un edificio is a building. Some edificios have a portero/conserje: doorman, and some edificios are also con ascensor: with elevator, and some are sin ascensor: without elevator. Most of the times, obras nuevas: newly built buildings have an elevator. This might be good to know if you do or don't want to walk the stairs to your planta: floor. The highest piso: flat, of the building often comes with a terrace, this flat is called an ático: an attic. The flat on the ground floor is called a bajo. Bajos often have direct access to the street. It might also happen that you find an estudio: a studio apartment in which there are no rooms, it is simply open space. Normally, the superfície: surface size of  an estudio is smaller than a normal flat. By the way, a 'studio' in Spain means a flat without an independent bedroom. You could technically have a 100m2 studio. If you're looking to compartir: share, a flat with friends or family than you might need a bigger flat with maybe a piscina: swimming pool, a zona comuntaria: communal zone or a jardín comuntaria: communal garden. What also might be useful to know is whether a flat is in buen estado: good condition, or reformado: renovated.

This means rental, maybe you're even looking for an apartment to rent with opcion de venta, this means there is an option to buy. But if you just want to rent a place, then an agency might ask if you're looking for corta estancia: short-term, media estancia: mid-term or larga estancia: long-term rental. When you found the flat of your dreams (which you might find here) you'll have to pay a reserva: reserve fund to the agency, this is the guarantee that your flat is actually yours and the agent will take it down on the portals, and no one else will have it but you. If you're lucky the flat is disponible ya: available now and you can move in right a way. You will also have to pay fianza: security deposit to the propietario: owner, which they pay you back at the end of the contract. In addition to that, you also pay the comisión de agencia: agency fee to the agencia inmobiliaria: real estate agency. They also might talk about the IVA, this means the value-added tax (VAT). In the end you will have to sign the contrato de arrendamiento: rental contract, you get los llaves: keys, and then you are officially the inquilino: tenant and we say congrats with your place!

Are some things still not clear to you? don't hesitate to contact us, we'll be to happy explain everything to you!