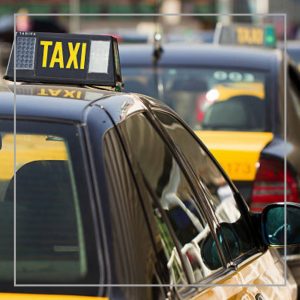 Are you coming to Barcelona and wondering what Barcelona taxis are like? what are the taxi rates? Don’t worry, Barcelona taxis are a convenient and affordable alternative to other means of public transportation. Indeed, Barcelona cabs are not that expensive and don’t try to fool you as much as in other European countries. I remember being completely nervous when I first arrived in Barcelona. I was looking for a BCN taxi and wondering if it would be like in Rome where the taxi driver took me on a joy ride and made me pay 68 €… Actually, I have had only good experiences with Barcelona cab drivers. Barcelona taxis have rules and normally stick to them. 1)      Grabbing a Barcelona cab: Barcelona taxis are easily recognizable by their yellow and black cars. A green light over their roof indicates when they are free. Just walk to the nearest large street and wave in the direction of  the first green light you see. Actually, there are plenty of Barcelona taxis running through the streets in Barcelona day and night. I’ve never waited more than 5 minutes, no matter when, except one night on Avenida de los Tilos around 5am.   I also have so many funny stories about Barcelona cab battles (when two different people or groups are trying to jump in the same available taxi) after coming out of clubs but hey, that’s not the subject here (wait for my next posts…). If you don’t like playing it by ear in the street, I recommend you’d call at one of the phone numbers displayed here.  Although it should be clarified that calling for a taxi is the slowest way to get one.  Just stand out in the street and wait, one will come along shortly. 2)      Paying a Barcelona cab: Barcelona cabs display their rates inside the cab. They are meter based. The minimum price when taking a BCN taxi is 2€. Supplements may be added according to the time (night or day) and the area in which you climb in the taxi and what you’re taking with you. For example, taking a Barcelona cab from BCN Airport with a suitcase will cost you 3.10€ more for you’re departing from the airport and 1€ more per piece of luggage. Just to give you an idea, a 10 minutes ride at night, without any other supplement, usually costs 8-9€. Please check 2015 Barcelona taxi fares carefully. Also good to know, the majority of Barcelona taxis don’t take credit cards. So make sure you have cash or ask the driver before you get in.  Plus, ask for a receipt with all at the end of the ride. If something goes wrong, you’ll have some proof on which to rely. 3)      Tipping a Barcelona cab: You’re not expected to tip Barcelona cab drivers. So if you’re particularly satisfied by the service, you might give the driver a couple of coins, but just know it is not the custom and that Barcelona taxis will give you back your change exactly. [youtube]http://www.youtube.com/watch?v=mBJ8mOkemv4&NR=1[/youtube] 4)      Discouraging a Barcelona cab from taking advantage of you: Even if most of Barcelona taxis are honest, some of them try to take advantage of tourists (as in every other country). 5)      Complaining about Barcelona taxis: Let’s say that you discovered this post too late and have already been fooled. What to do? First, don’t worry; know it can happen even to very good people. Second, dry your tears, master your anger and fill in the official complaint form online with all details printed on the receipt: taxi number, car plate number, amount paid, time and day. 6)      Losing something in a Barcelona cab: With the help of the receipt (this little piece of paper is really precious, always ask for it!), give all information the Lost Property Office or the Barcelona Taxi Lost Property Helpline need to locate the cab you were in. Barcelona Lost Property Office: Placa de Carles Pi i Sunyer, 8-10, 08002 Barcelona. Tel: 010  (when in Barcelona) Barcelona Taxi Lost Property Helpline: Tel: (0034) 90 210 1564 or by email: objper-taxi@amb.cat All right, I think that’s about it. For more info, check the Barcelona Cab Website. All yours! A.