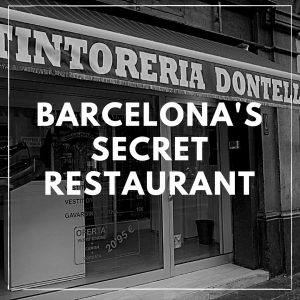 If I was to tell you that one of the most entertaining places to visit in Barcelona is a small launderette under the name of “Dontell,” you’d probably think I was mad. However, what if I was to tell you that this little gem, hidden behind its name meaning literally “Don’t tell”, is one of the best kept secrets in Barcelona? Intrigued? Well you should be because this non-descript dry cleaners is actually Barcelona’s secret restaurant. Not making much sense? Let me explain further.

“Dontell”, situated right here in the heart of Barcelona seems pretty much like any other dry cleaners. Jackets and suits hang neatly above a poky counter and laundry prices are displayed in the window for all to see. To the everyday passer-by, this little Spanish titntoieria hints at nothing out of the ordinary and from first impressions it seems almost absurd to think that concealed somewhere inside is Barcelona’s secret restaurant. However, if you happen to saunter past a little later in the evening you’re likely to see small clusters of smartly dressed couples entering this plain looking establishment and the truth is that they’re not intending to have their clothes dry cleaned!

How Barcelona’s secret restaurant was revealed

It all started one Wednesday afternoon when I was casually walking down the road looking for a place to have my suit dry-cleaned. I thought my luck was in as I came across a small, neat and professional looking place on C/Aribau, right in the heart of Barcelona. According to the times displayed by the door they were open for business, so I began ringing the bell hoping someone would come and help me. This bell-ringing went on for a good few minutes before a smartly dressed gentleman appeared and asked in a very abrupt tone what it was that I wanted. Already frustrated with the delay I came to the conclusion that their customer service skills were appalling, but not wanting to waste any more time I began to explain that I wanted more information on their dry cleaning service. Looking at me in complete amazement the young man simply told me that this was in fact a restaurant, he then turned on his heel and disappeared back beyond the curtain from which he’d first appeared. Suffice to say I was left very confused. Later that day, still in a state of bewilderment I decided to check out their webpage. At first glance, just like the place itself, it gives nothing away but wanting to test the water I shot them an email requesting a table for two. Shortly later a reply popped in to my Inbox confirming a reservation for 9pm the following Tuesday, and just like that I realised I had discovered something much more interesting than the average launderette. “Dontell”, a great place to visit in Barcelona

Tuesday fast approached and before I knew it I was back at the Dry Cleaners, a little more glammed-up and full of intrigue. Standing at the door, it looked just as I’d remembered, the only difference was the smartly dressed lady with an earpiece busily working among the hanging jackets and suggesting all may not be as it seems. As we walked in we were ordered to punch a private code into the panel which would in turn release the door and allow us to meet her on the other side. We did as were asked and as the door slid back, the mystery was solved. At the end of the corridor, complete with a DJ box for their late night parties, was Barcelona’s secret restaurant. To the left stood the kitchen, nearly as big as the restaurant itself, cleverly equipped with glass paneling and sliding doors so you could observe the chefs whilst you ate. From floor to ceiling the place was decked out with, modern, grand, elaborate decor, giving the place a trendy, fashionista feel. The waiting-staff were as camp and over-the-top as the design and with Jack Johnson playing on repeat in the background, the whole combination made for a manic yet entertaining evening. The food was good, not amazing and not as creative as I’d expected but definitely not your average Catalan dish, Fillet of Ox and foie drizzled with chocolate sauce were on my menu. “Dontell” is what it is, an experience. Whoever came up with the idea is a genius and although it’s more about the whole gimmick than the cuisine, it’s extremely entertaining and is definitely a great place to visit whilst in Barcelona.

Are there more secret restaurants in the City?

Apparently, the idea behind “Dontell” dry cleaners was to create a secret, a gift for visitors, and it does this perfectly. The trend of clandestine restaurants has really taken off recently and word on the street suggests this may not be the only underground restaurant of its kind in Barcelona. There’s even a rumour that the manager of “Dontell” plans to create another restaurant behind a hair salon. However, whether or not the rumours are true or not I really can’t say, but if you happen to find it before me just remember don’t-tell a soul, the gift is in the secret. Do you know any other of Barcelona's secret restaurants?  Leave a comment below and let us know! Kerry Jessop