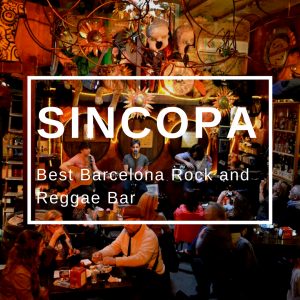 Do you have any idea where Barcelona's rock and reggae bar Síncopa really comes from? Who used to own it? Well, my beloved Barcelona newbie, "Síncopa" is the friendliest and most international reggae and rock ‘n’ roll bar in Barcelona. AND, it used to be owned by none other than Manu Chao!

Miri and I discovered Síncopa wandering through el Borne on our second week-end in Barcelona and immediately fell in love with its originality, great music selection and friendly atmosphere. So we went back again and again. Drinking Estrella in Síncopa became a habit and a meeting point for us and our friends which now include Síncopa’s waiters who are from all over the world. Elise, for example, is French and has been working in Síncopa for a year now. She obviously knows a lot about the place and shared info with us as we were sipping the delicious Tango Cocktails they serve there (beer with French grenadine syrup, try it, you won’t be disappointed!). Síncopa, she told us, was bought by Manu Chao (Yes!! The very one!) 9 years ago together with the current (also French) owner, Philippe M. Unfortunately and for some unknown reason, Manu Chao and Philippe had an argument which led to Manu Chao selling his part of the business to one of his friends, Ricky. She also is of international descent: half French, half Portuguese. The Barcelona Manu Chao’s bar was conceived as a music bar and its regular clientele has been grooving on reggae, ska and world music beats since its creation. Manu Chao used to organize concerts in a small corner of the music bar and other artists as well such as La Rue Ketanou and Les Ogres de Barback but grouchy neighbours complained about the noise. So Síncopa had to turn to CD compilation of ska, all types of world music (French, latina…) and reggae which inspired the name of the bar: “síncopa” in Spanish means syncopation, or unexpected rhythm, especially used in reggae. “Sín copa” also stands for “without a glass”; funny name for a bar! Rock ‘n’ roll was then slowly added to the playlist. The only person banned and not allowed to enter the bar is Manu Chao himself (stemming from his fallout with the current owner).  Manu's music is also banned from being played except for his work with the band Mano Negra as the current owner took part in the band.  Sound strange to you too?  Anyways, the music is great and that's what's important. So please, next time you're out and about around Carrer D'Avinyo— go check it out!  Be submerged by the red light that floods the walls.  Be intrigued by the dozens of eclectic objects strewn around the bar (such as the bank notes from all different countries and the garlic they put out to frighten away vampires).  Make sure not to miss the upside down stage in the back right corner where the mannequin singers hang from the ceiling.  This is all that's left to remember the great lives shows they used to have.  Do you know who each band member is?  Ask the waiters! (I could tell you but that would spoil the surprise ;)). Come sit at the long bar that runs the whole length of Sincopa.  The patrons are more than friendly and it's super easy to strike up conversations with complete strangers, and usually in all kinds of different languages.  You will hear a lot of French (as Sincopa has been heavily recommended by the famous French travel guide Le Routard for several years now). But you'll hear everything really.  Italian, English, and of course Spanish with Elise, the Chilean bartenders Fito and Christian, and the Argentinian bartender Maria.  All the staff speaks at least 3 languages and will welcome you as if you were long lost friends! To sum it up, we give Síncopa 3 stars for the price and location and 5 stars for the music and atmosphere. Experience one of the best rock and reggae bars in Barcelona! Yours! A.