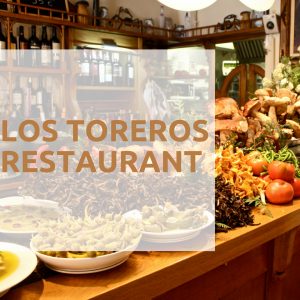 "My Favourite Tapas Restaurant in Barcelona - But please, keep this secret, I don't want them setting the Bulls on me!"

The information I'm going to share with you, about this secret Barcelona restaurant could get me into some serious trouble with the locals, so don't tell too many people. This fantastic little Spanish Tapas restaurant is close to Las Ramblas but tucked away enough to be kept secret. From the outside, it's un-impressive and plain, and to be honest, it's not much better on the inside. However, this is what I like about this place. It's not "all show and no go", it's unpretentious, good, honest Catalan Tapas at good prices. The staff don't stand outside the front trying to lure you in with tatty old menus or cheesy banter.  Their approach is honest and they seat you quickly, and efficiently. In fact, I would say the service is the quickest I have received in any Barcelona restaurant, and compares well to some of the best places I have eaten the world-over. "Los Toreros = The Bullfighters" [caption id="attachment_8853" align="alignright" width="466"]

Tapas in BCN - Sometimes a risky business, but not at Los Toreros![/caption] Los Toreros restaurant Barcelona is named after "The Bullfighters", those crazy guy's who fight/fought bulls in the traditional Spanish bull rings. Whether you are for or against Bull fighting, this traditional Spanish Tapas restaurant in Barcelona is guaranteed to give you the horn. The walls are adorned with old, rustic pictures of Los Toreros from over the years. Many standing proudly with their super-tite trousers, showing (and I mean literally) the size of their cahunas!

How BIG are your Cahunas?

As you may be able to tell, this is my favourite Barcelona Restaurant and the reason is simple: Quality authentic Catalan food. It's like eating in Grandma's kitchen, if your Grandma was from Catalonia of course. A simple but favourite Tapa of mine is the pa amb tomàquet, slices of rustic, toasted bread, topped with mashed tomato, garlic and olive oil. Admittedly it doesn't sound all that exciting but it's a real classic Catalan tradition, Pa amb Tomàquet (Catalan), Pan con Tomate (Spanish) or Bread with Tomato (English). [caption id="attachment_8852" align="alignleft" width="317"]