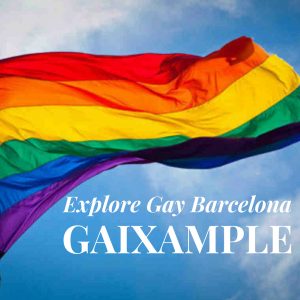 How to find a Gay Bar in the Gay Eixample in Barcelona?

Have you ever heard of Gay Eixample, or “Gaixample”?

Well, my friend had not and I was eager to discover the  Gay area of Barcelona, situated right in the middle of the city, in Eixample to be more precise. The word comes from a conjunction of 'Gai', which means gay in Catalán, and 'Eixample", which is Catalán for extension (the name of the neighbourhood).

Actually, the Gaixample (strictly) is bordered by the following streets: Balmes, Gran Via de les Corts Catalanes, Comte d'Urgell, and Aragó.  If you go to the area of C/ Diputació between C/ Aribau and C/ Villarroel, you'll find the most heavily populated gay area of Barcelona (the heart of the 'gaybourhood', if you will), where it's common to see rainbow flags hanging from shop and bar windows. They say that during the Franco period Barcelona was always one of the most gay friendly cities in Spain, and today is no different.  Over 150,000 gay travelers come to Barcelona each year just to check out the scene.  In short, Barcelona is extremely liberal and more than welcoming to the gay community.  Tolerance is great, isn't it? Our first venture to find a 'gay ol' time' in Barcelona started with the cute staff half-hidden behind their reception desk at the famous Hotel Axel.  They looked at me with bright smiles and told me to be patient for a second as they checked on their computer and nicely printed a map for me. It was 10pm, on a cold Monday at the end of January, 2010, and my friend and I wanted to explore Gaixample. For those who love history, like me, the Eixample (pronounced “Eshampla”) was built at the end of the 19th Century following the concept of rationalized urbanization and public health that developed at this time in all international and quickly growing cities. Paris had Baron Haussmann, London had the Metropolitan Board of Works and Barcelona had Ildefons Cerdà.  He designed the square block/grid structure with parallel streets and wide avenues crossing at 90° angles in order to ease traffic, air circulation and sun light penetration in what could have otherwise been as disorganized an effort as the old part of the city. Also influenced by the Modernista architects like Gaudí (see the Gaudí Tour post soon to come out on SuiteLife website), Eixample has become an expansive, safe, and in places, a very posh area. It is the biggest neighbourhood in the city and is home to lots of commerce and residential living.  It also has one of the most active gay districts in Barcelona.

Indeed, Gaixample is full of Gay and Lesbian bars and clubs...

which welcome everyone with open arms: Gays, Lesbians, Trans and Hetero.  A few of them, depending on the day, are stricter on entrance (the only one coming to my mind happens to be the well-known club Space on Sundays, or Gay Day, during which only sexy tanned boys are allowed in…). Just follow the rainbow flags hanging here and there: yes, you are in Gay Barcelona!

One of the well-known Gay bars is called BCN Punto where my friend and I finally ended up after having established that Café Dietrich’s pink floodlit doors were closed on this specific Monday (but they usually open every day from 10pm till 4am and welcome the crowd who's always excited to see their unprecedented music-hall performances). We were greeted by a panel at the entrance, reminding clients that they were the Gay and Lesbian Community’s welcome guests. We entered a large, clear and not yet full room that had a long bar on the right and huge mirrors on the left, climbed some wooden stairs and sat at a table on the billiard-table mezzanine floor. The waiter brought us our drinks and with each one a free entry ticket to one of the Arena Gay clubs. If you want to meet young good-looking guys in hot pants, with great personal grooming habits, and the best bodies in Barcelona, you definitely have to check out one of the Arena clubs.  Your chances of scoring will be better if you are actually male, but your chances of having a great time are high no matter what gender, race, creed, or colour you happen to be. One evening was of course not enough to explore all of the Barcelona Gay bars, but I will definitely keep you posted on exceptional events and adventures to find in the Gay Eixample! And by the way, Gaixample is not the only Gay area in Barcelona: there's a little town called Sitges (Sitges blog article coming soon to the SuiteLife site) and it is world famous for its Gay beach, the Platja de la Bossa Rodona. See you there in summer! Yours! A.