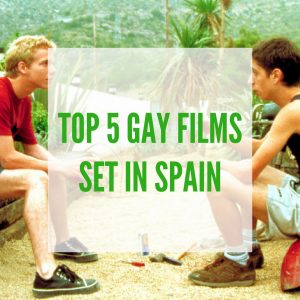 The Most Famous Spanish Gay Films Set in Spain

Last week, I wrote a blog on Films Set in Barcelona. This article made me realize that up until now, I hadn't thought about writing a similar blog but on Gay Films Set in Spain for our 'From Behind the Rear' series! Below you will find a list of our top 5 gay films set in Spain !

We start our Gay Films Set in Spain list with Nico and Dani (2000) not because it takes place in the Catalan town of Castelldefels and in various locations in the country of Garraf but because it touches on a couple of original concepts rarely found in other gay movies. First of the title of the film doesn't refer to the character's name but to a form of mutual masturbation practiced between the two main characters. I got to admit that I had passed over this film several times, thinking it would be your cliche packed coming-of-age movie - the plot description didn't help one bit either (Two teenagers awakening sexually, with one coming to terms with his homosexuality and the other with his heterosexuality). Ugh, I heard those lines many time before. Don't get me wrong, it's not a world classic but was a huge step for the Spanish gay cinema.

There aren't many gay films that I could say are very original or down right entertaining but Chueca Town slapped me on the face and yelled that there are some Gay films out there worth watching if only I took the time to search for them. The movie is funny (if you like to laugh at yourself, that is) and very entertaining. As in all the Gay Films Set in Spain list, the cliches that are found abundandly on gay movies were left out on the street for this one - thank you very much! The movie revolves around the gay bear couple Leo (Pepon Nieto) and Rey (Carlos Fuentes) who lives in the Chueca neighborhood of Madrid. To begin with they're not your stereotypical gay couple as they are not interested in fashion or gyms but instead love football. On the other side of the spetrum there is Victor (Pablo Puyol) who owns a real estate agency and has the ambitious plan to make Chueca a town of young gays by assassinating all the old people and taking their apartments. When Victor murders the bear couple's elderly neighbor, Rey discover he has inherited the woman's property. The tension increases because Victor wants to buy it from Rey but Rey wants to give it to his mother Antonia (Concha Velasco) who hates Leo and has a goal to make his life miserable. This creates relationship problems and Victor decides to take advantage of the situation by getting up close and personal with Leo with the bigger picture of killing Antonia. Meanwhile the police thinks the events are isolated except for investigator Mila (Rosa Maria Sarda) who ridden by phobias is certain that all the victims were murdered by the same person who sprays them with an expensive perfume after they're dead. I highly recommend this movie if you want to be entertained and not bombarded by cliches.

Probably this 1990 Spanish gay film resembles every gay man's relationship with their female best friend at one time or another. The story revolves around a strong friendship between a gay man and his female best friend is tested when he enters into a relationship with another man. The girlfriend (used to getting all the attention from her gay male friend) becomes jealous changing the lives and friendship of all the characters involved. Amor de Hombre or love for another man was written and directed by Yolanda Garcia Serrano and Juan Luis Iborra. Loles Leon, Andrea Occhipinti and Pedro Mari Sanchez starres in the movie.

To my opinion, Madrid is the Spanish city that makes the most gay films and most times they make it right. This is true about Spinnin'. Although the movie was shot in 2007, the story settings takes place in Madrid, 1995 and it concerns the story of Garate and Omar a young gay couple who wants to have a baby. After failed attempts with their female pals, they befriend Raquel, a pregnant woman whose partner has died of aids. Normally I wouldn't give such a conventional storyline the light of day, however, writer and director Eusebio Pastrana took it to a whole new level and turned it into an entertaining and inventive adventure brought to live by actors Damian Alcolea, Matilde Alcazar, and Maria Brea.  And now with gay marriage becoming legal in many places around the world, lots of gay couple should give this movie a go.

This Spanish film tackles pretty hairy subjects...and not just the unshaven members of the gay bear scene. It is a movie is about a handsome, husky, and promiscuous bear chaser named Pedro (Jose Luis Garcia-Perez), who leads an active social life and have a big circle of friends, until he ends up as a guardian to his 9-year-old nephew, Bernando (David Castillo). When it appears as though it might become a permanent arrangement, Pedro turns to his friends for guidance as his nephew begins to forge a household together. As you can see the films touches on the subject of gay-parenting with a flair for the dramatics...but don't be fooled by the lightheartedness this films brings throughout its 100 minutes as the film also depicts sex. There are more Gay Films Set in Spain but they are few and far in between. Most of you will probably be upset to find out that Antonio Banderas also did a Spanish Gay film in 1987 (La Ley del Deseo/Law of Desire) where he portrays a film maker whose sexual disorientation jepordizes his latest project - and there is a great sex scene! This list focuses on the most recent of them all. Do you guys have any great movies that we could add to the list?? Let us know in the comments! ~Argenis