HOW TO GET SPANISH CITIZENSHIP-5 SIMPLE STEPS! 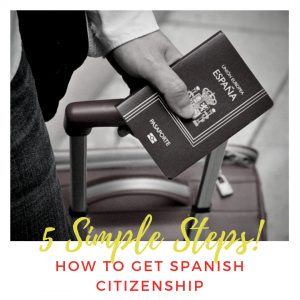 Spanish Citizenship or Nationality: How To Get it In 5 Simple Steps

However, there are also some exceptions:

In order to fill in the documentation, you will have to go to your Residence Civil Registry. Note - not to the Ministry of Justice! In Barcelona, you can find the exact location with this link. The address is Plaça Duc de Medinaceli, 2, 08071, Phone: (+34) 934120474.

You will have to fill in the application form. You can find it right here. Note that during the process you need to prove that your are a "good citizen". And also show your integration in the Spanish society; for example the basic questions are about your Spanish level and your engagement in social activities to show you are part of Spanish society.

Once you have filled out all the paperwork required of you in the registry, this will be in charge of sending the case to the General Department of Nationality and Civil Status Directorate General of Registries and Notaries. When your file is received you will be notified in writing. Once informed, where appropriate, the granting of Spanish nationality must perform the subsequent steps in the Civil Registry where you applied. For more info go to the official Ministry of Justice website! Info will be presented in Spanish, so it's better to read our blog first!