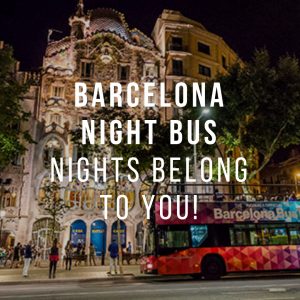 It's always great to not have to fuss about the time while you're out in Barcelona partying, and Barcelona night buses are here to simplify your life. The night buses are easy to figure out. You can check their routes as well as their hours right at the bus stops (look for the blue board). If you live further away or out of the city, the night bus can be a real savior when the metro is closed and your wallet can't withstand a more expensive taxi ride. Barcelona night bus runs from 10.30pm to 5.00am (depends on the lines). You can recognize them easily thanks to the ‘N’ before the number on the bus. They all pass through plaza Catalunya and this is really convenient if you want to end up partying the night away and not having to worry about how you'll get your tired drunken body home at the end of the evening. The price for Barcelona night bus' tickets is pretty reasonable and is the same as any other bus or metro ride: 2€ for one ticket or 9.25€ for 10 tickets. Their website is also available in English and they seem to be keeping up with the times! You can now download ipad/mobile apps which are hugely helpful for determining routes and times based on your current position. Website in English For the more courageous, there is an other way to move during the night: Bicing. It's working 24h a day on Saturdays, Sundays and holidays. During the week, you can't use it from 2am to 5am. Click here to get  more information about Cycling in Barcelona.

Every 20 minutes, a Barcelona night bus (N17) takes off to Barcelona airport (El Prat de Llobregat). You can catch it in plaza Catalunya near Ronda de la Universitat street. Obviously, the N17  bus is also going from the airport to plaza Catalunya. The price is the same as other Barcelona Night Bus and this is cheaper than the Aerobus which costs 5.30€. If you want to buy a T-10 ticket you can't buy it in the bus, so you should buy it before hand, in a metro station for example. The night bus goes to many other locations, mostly areas just outside of the city like San Cugat, San Just, Espluges, and even as far as Castelldefels and Santa Caloma. Even if you live up in the zona alta of Barcelona (Sarria/Sant Gervasi) the night bus can be useful for you. What about you? Do you have any tricks for moving during the night in Barcelona ? Cheers, Hugo