LEARN ABOUT CATALAN CULTURE IN UNDER 10 MINUTES! 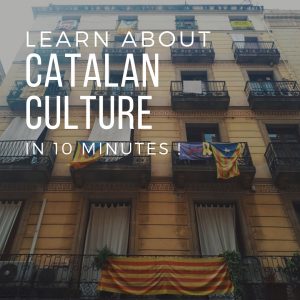 Knowing Catalan culture is a very useful tool if you are living or traveling in Barcelona. For example, if you don't know that Barcelona is the capital of Catalunya, then you may as well be wearing a sign saying "I am a tourist." But you don't have to be an expert! Just knowing a few bits and pieces on Catalan culture can go a long way. So don't be a completely uninformed foreigner. Read on to learn some quick facts about Barcelona's autonomous community. Also be sure to read some fun facts about Barcelona and the history of how Barcelona got its name.

- Catalunya is located in the Northeast part of Spain and Iberian Peninsula. - It borders France to the north and the Mediterranean Sea to the east. - Covers 32.114 km2 - Official population is 7.535.521 - Official languages are Catalan, Castellano (Spanish), and Aranese.

- Catalunya is an autonomous community of Spain, meaning: - This region of Spain has its own self-government - It has the rights of nationalities and regions. - It manages its schools, social services, urban/rural development, health care, etc. -Catalunya is one of the most economically dynamic regions of Spain. With Barcelona as its capital, it is also a huge tourist destination and international cultural center.

-The origin of the name 'Catalunya' has diverse interpretations. The 2 most popular are 'Land of the Castles' and 'Land of the Goths' -It was once conquered by Rome and became part of the Roman Empire.

-Catalan culture began to develop in the Middle Ages when certain regions of the Iberian Peninsula were ruled by Frankish counts. -Once a part of the the Kingdom of Aragon, Catalunya became a maritime power by trading goods.

-Catalunya has had a long history of both gaining and losing its autonomy. -Catalan culture and nationalism was severely repressed during the regime of Franco (1939-1975). -Catalunya recovered political and cultural autonomy in 1978 when Spain adopted a democratic Constitution.

-The Flag of Catalunya is "La Senyera" -National Day of Catalunya, called 'La Diada,' is celebrated on September 11th. It commemorates the 1714 siege of Barcelona defeat during the war of the Spanish Succession. -The Anthem of Catalunya is 'Els Segadors'. It is based on the 1639-1640 events during the Catalan revolt. -'Castells' are constructions of human towers

-Parades consist of 'gegants' (giants) and 'correfocs' (devils/fireworks) -Prohibition of bullfighting in Catalunya came into effect in 2010. Catalunya is only the second Spanish territory to ban bullfighting.

While these are only basic facts, they are nonetheless important little pieces to know. Of course, Catalunya has an extensive history, and many times it can be controversial. What do you think is the coolest aspect of Catalan culture? -Sam Fricker