BARCELONA HISTORY: HOW BARCELONA GOT ITS NAME 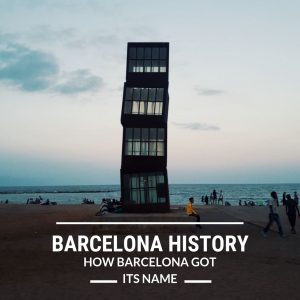 Today, SuiteLife is giving you a quick and painless Barcelona history lesson as we explore everything that is Barcelona. Former monikers include: Barcilonum, Barceno, BCN, Barca, Barna, Barchinona, Barçalona, Barchelona, and Barchenona. Our favorite city in the world has a deep rooted history, and it has plenty of names to show it. Barcelona has 5 million visitors each year and a population of 1.6 million inhabitants. We love to live here, we love to visit, but do we know where the name Barcelona comes from and what it means? Here comes a little bit of Barcelona history. “A Tale of Two Cities” is a classic story by Charles Dickens describing two amazing European cities; London and Paris. However, Barcelona is so special that it has two tales for itself. Catalonia’s capital city goes back hundreds of years, so far that there are different ideas to it’s origins. There are two legends that refer to the founding of Barcelona. Our first tale brings us 400 years before the creation of Rome. It is a time of gods and monsters. Our favorite mythological hero, Hercules, was surviving perilous adventures before he was singing and dancing in Disney movies. Hercules braved his famous 12 perils, which included fighting the three headed dog Cerberus, taking the head of Medusa, defeating the hydra, and going to the Underworld. One story many forget is that Hercules actually accompanied Jason and the Argonauts on their quest for the golden fleece. Jason, Hercules and the Argonauts set sail with nine ships filled with the strongest and bravest men of their time. During their travels, one of the ships was lost in bad weather off of the Catalan coast. Hercules set out to find his lost friends only to find them, days later, along a small hill, all alive and safe. The crew was taken by the beauty of the coast and hills, and they decided to remain. It was on this coastal landscape that Hercules and his men founded the city Barca Nona, or Ninth Ship. Our next story may not include Roman gods, but it contains famous historical figures just the same. The great Carthaginian leader and father of Hannibal, Hamilcar Barca, won many battles and was noted as an excellent general. He obtained permission from the Carthaginian Senate to recruit and train his own army, in hopes of expanding Carthage’s empire.  Barca took his army of brave Carthaginian soldiers across northern Africa and crossed into Europe along the Strait of Gibraltar. After eight years of war, Hamilcar Barca obtained a large stretch of land in Espanya along the Mediterranean coast. Barca established the port city of Barcino in 230 BC, only two years before his death in 228 BC. Between the Carthaginians, the Catalans, Romans, Moors, Pyrenees, and Spanish, this stunning city has had many names. It has two wondrous stories that share it’s beginnings, and it has millions of people the world over to continue keeping its spirit alive.