SOME OF THE BEST BARCELONA SCULPTURES 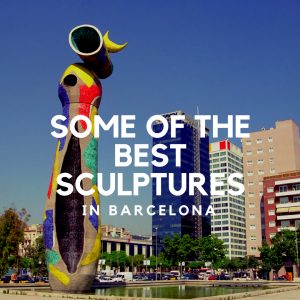 For many, Barcelona is inextricably linked with the work of Antoni Gaudí. People from all over the world visit the city to wonder at his highly original organic buildings and sculptures. Barcelona wouldn’t be the same without these iconic works. Looking beyond Gaudí, Barcelona has a selection of other permanent more modern sculptural works that have been significant in defining new periods and adorning public spaces in the city. Sometimes it’s easy to pass by the open air gallery that is Barcelona so keep your eyes peeled the next time you wander its streets and ´plazas’. Here are some worth checking out. Barcelona Sculptures: The Raval Cat – Designed by Fernando Botero this is one of Barcelona’s most popular sculptures. The big, black bulbous cat sits staring out on the Rambla de Raval. It has moved around the city and has finally come to rest here. As it watches over the antics of the Raval, kids love to scramble up its legs and others use it as a meeting point. It has in part ended up here to help promote the regeneration of the Raval district.

Barcelona Sculptures : Cap de Barcelona – The famous Pop Artist, Roy Lichtenstein, was commissioned to create a sculpture for the 1992 Olympics. Originally to be placed in the mountains, it was decided that it would be more suited to the old port. Standing 20 metres high, it’s instantly recognisable as a Lichtenstein with abstract features and a use of bold colour to represent a woman’s head. He used the old technique of “Trencadis”, popular with Modernists in Catalonia where ceramic tiles are smashed and stuck back together to create a work of art. Barcelona Sculptures: Frank Gehry’s Fish – The giant ‘peix’ has become just as emblematic of Barcelona as any of Gaudí’s structures. The first piece to be designed by Gehry & Associates using computer aided design was commissioned for the Olympics. Highly conceptual, this huge copper fish glints in the setting sun and reflects a modern Barcelona that was transformed by the Olympics Games. It is also very much a part of its environment being formed at the same time as the expanded seafront and the new beaches of Bogatel, Nova Icària, and Mar Bella.

Barcelona Sculptures: Woman with Bird – One of Barcelona´s most famous artists, Miró, bequeathed this sculpture to Barcelona in 1983. The The Dona I Ocell (Woman with Bird) can be found in Parc Joan Miró near Plaza Espanya and uses the same “Trencadis” technique of shattered and reconstituted tiles so typical of Gaudí’s work. Miró’s last public work is reminiscent of many of his expressionist paintings. Barcelona Sculptures: Cloud & Chair – You might miss this rambling sculpture called Nuvol i Cadira or Cloud & Chair on the Modernist building of the Antoni Tapies Foundation on calle Aragon. The tangled tubular structure takes up the space between the two buildings and either looks like a wild abstract painting or barbed wire protection depending on your point of view. You need to look closely to see the chair. The foundation was established by Catalunya´s most famous artist, Antoni Tapies, to promote contemporary art.

If you know of any other cool sculptures in Barcelona let us know! Ranald