BARCELONA BALLROOM DANCING: WHERE TO DANCE TANGO IN BARCELONA 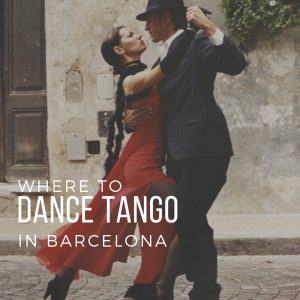 Whoever wants to dance Tango in barcelona, or Salsa, or anything else has only too much to choose from! I am not talking about clubs or discos but about this particular, elegant and incredibly rich ballroom dancing culture that has been passed on for generations, and especially Tango, Salsa, Flamenco and all other Latin dances. If you want to unveil the real nature of Latin culture, you’ll have to look at it through the dance window as well. As a big Latin dance fan, I went on the hunt for hidden ballroom dancing places in Barcelona especially for you! My first prey was Barcelona milongas, or hidden Barcelona Tango cafés. After some research on the Internet, I realized how big is Tango in Barcelona ! Not only as the City of Barcelona organized yearly Tango festivals since 2004, but there’s also at least one milonga going on in Barcelona every night, usually starting around 10pm and lasting until 1am, if not later. Entries to the enchanted Barcelona Tango world are quite cheap also, starting from €4. So I rushed to the first Barcelona Tango milonga I could attend in person. It was the so called Milonga Maldita (or Cursed Milonga), starting on a Monday at 10.30 pm at the Pipa Club. Now let me take you with me for this first visit. First of all, the Barcelona Pipa Club is not easy to find. Overlooking Plaça Reial, it has been known only by privileged cigar and pipe smokers for decades, lounging in red leather armchairs while reading newspapers, comfortably hidden in a Victorian style six-room apartment. Nowadays, the Barcelona Pipa Club turns into a jazz bar at night, except on Mondays and Tuesdays when it is dedicated to Barcelona Tango. To prevent any bad surprise, it is better to call the organizers each time but be careful: some of them speak only Spanish! Ring the bell at the door at 3, Plaça Reial and go upstairs to be welcomed by Sherlock Holmes’ portrait. You’ll find every kind of dancer in the Milonga Maldita, all under the Barcelona and Tango spells, a double curse that is not easy to bear unless you you can somehow visit every Barcelona milonga! There was a bit of that special Argentinian milonga atmosphere trapped in the low lights and red reflects in the smoky Pipa Club. As a shy beginner, I just sat down in the cosy room and observed the possessed couples twirling around endlessly, until a dark gentleman slightly bowed in front of me, held his hand out to me and threw me into Barcelona Tango magic. [youtube]http://www.youtube.com/watch?v=A7oxZcd8ngM&feature=related [/youtube] Next stop: Salsa in Barcelona! Yours! A.