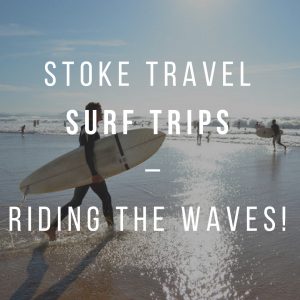 Welcome to the first guide in our series covering the awesome Stoke Travel and their crazy ass trips to.......pretty much everywhere! This week, we're going talk about their super cool surfing trips to the surf meccas such as San Sebastian in the Basque Country (North Spain) and further afield. Don't know who Stoke Travel are? Read our interview with the man behind the magic - Toby Paramor. As you may be aware, summer has officially landed in Barcelona and the city is really coming to life with wave upon wave (excuse the pun, this is a surf blog after all!) of tourists descending on our city. At some point, you'd be glad just to get out for a few days. Undoubtedly, there is no better way than to go to another part of Spain or even to another country and let your hair down. If surfing is your thing then you'll probably realise by now that there isn't much in the way of surfing in Barcelona. So what's a guy who wants to surf to do? Enter Stoke!

Surfs up! Tell me more.

When you think of surfing, Europe is probably not the first part of the world which comes to mind, but thanks to Stoke Travel you can certainly change that image and experience some of the best surfing spots in the world. Without wanting to sound overdramatic, Stoke Travel could be the closest to what Barcelona has to a surf God. Offering surf trips in Spain, France and Portugal, and even outside of Europe to Morocco and even Brazil, there is certainly no limit to the surfing based miracles that these guys can conjure up! If this wasn't enough, they even have exclusive surf camps at these destinations! One of their trips is a so-called 'Surfari' around Spain and France which is exactly what it says on the tin (no animals though). You go travelling with them to parts of France and Spain looking for good spots to surf! If you're a massive surf fan (I mean who isn't really?) then you will find such opportunities unmissable and you'll get quite possibly the best deal ever with these guys.

Trips on offer include: Sound incredible? It gets better!

Amazing, but how much?!

The icing on the metaphorical cake for these trips has to be the price. Some trips (such as the San Sebastian trip) have different packages that are offer depending on what you want. If you want just the basics, then each trip has a basic package which includes well.......the basics. You can even just turn up and hire a board and have lessons if you so wish! But the all inclusive package is where its really at. For a bargain 50+ Euros per day you can get your accommodation (camping of course!), 3 meals a day, surf lessons, surfboard hire and almost as good as the surfing - unlimited beer and sangria (for an extra 5 Euros). Sounds too good to be true? You'd better believe, cos good times don't cost a lot with Stoke which is why the trips that don't offer such packages still prove to be bargains too. The only thing you have to sort out yourself is getting to the destinations, which Stoke can help you with too!

Naturally, they have a lot of trips so the best way to keep up with up to date info is by heading their website and following them on the wonder that is Facebook. I'm sure that you'll agree this is an incredible way to try your hand at some surfing in Spain and beyond while you're here in Barcelona. Been on a Stoke trip before? Let us know what you thought! We'll bring you another Stokedate soon! - Chris