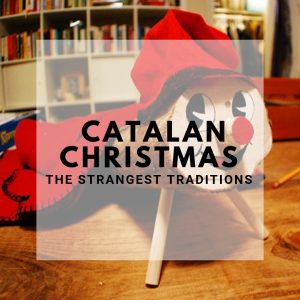 Santa may come down the chimney, but Caga Tio "poos" presents![/caption] My first Christmas in Barcelona was really, really good fun, partly because I discovered a new twist on the ever so repetitive Christmas traditions we have in the UK. I would orientate my English classes (I was working as an English teacher at the time) around Christmas themes such as Father Christmas and Snowmen etc. I noticed that every class, somebody would mention Caga Tio, and I had to ask "what is Caga Tio?". To tell you the truth, when they explained what Caga Tio was, I thought they were pulling my leg.

What Is Caga Tio?

Caga Tio, pronounced "Cacka-tee-oh"  is a wooden log with a smiley face painted onto one end. Caga Tio also wears a traditional Catalan red hat and is basically the Catalan equivalent of Santa Clause. Any one with a little Spanish knowledge, knows that "tio" means "uncle", however it also means "log" and Caga Tio translates to "poo Log", Christmassy hey?! "Caga Tio, if you don't poop well, I'll hit you with a stick" [caption id="attachment_9900" align="alignright" width="346"]

You have to "beat" Caga Tio with a stick to make him poop presents![/caption] The idea is that Caga Tio is "looked after" by the kids from the 8th of December to Christmas Eve. They cover his rear end with a blanket to keep him warm and feed him Turron and Orange peel every evening. The more they feed him, the more Christmas presents he will "poo-out" for Christmas. I kid you not people, I didn't believe it either, but it's true, and the story only gets stranger from here. Caga Tio, apparently, needs a little persuasion to "poo" the presents out, so after weeks of feeding Caga Tio and making sure he is warm with his blanket, the kids are given a stick to "beat" Caga Tio with. Only then will he "poo" out the presents. As if this isn't absurd enough, they also have to sing a song..... caga tió, caga torró, avellanes i mató, si no cagues bé et daré un cop de bastó. caga tió!" (poop log, poop turrón, hazelnuts and cottage cheese, if you don't poop well, I'll hit you with a stick, poop log!) Once they sing the song and beat Caga Tio with the stick, the kids look in the blanket which as been keeping Caga Tio warm for the last few weeks, to find their Christmas presents. I can only assume that if the kids aren't happy with their gifts, they beat him some more and throw him in the fire!

Caganer - "The Pooping Man" - What's The Obsession With Pooing in Catalunya?

As if one pooping Christmas character isn't enough, the Catalans also have "Caganer". This on is a little porcelain "nativity" figure of  a man, squatting down and laying one out, somewhere in the nativity scene. Caganer is a favourite of the kids, who love examining the Christmas nativity scene, trying to find where he is "pooping". Caganer is normally hidden somewhere among the more traditional nativity scene characters, and my students told me their favourite place to find him is "pooping" in the baby's manger.
[caption id="attachment_9904" align="alignleft" width="298"]

Caganer - Welcome to the weird world of Catalonia.[/caption]
I've been informed that the idea of "Caganer" is not meant to be disrespectful to any religious groups, Caganer is a sign of good-luck, his poo fertilises the land and provides a good harvest for the year to come. In modern times, it is simply a bit of fun and something special for the kids to enjoy. Caganer has been around since the 18th/19th century and is as popular as ever. However, the Catalan Government has banned Caganer from official Christmas displays in recent years....spoil sports!
Merry Christmas!
- Ben Holbrook
.