IS THERE A GAY CINEMA IN BARCELONA ? 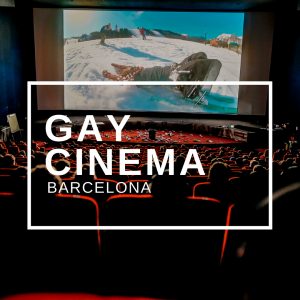 Is There A Gay Cinema in Barcelona ?

Is there a Gay cinema in Barcelona? Let's find out! What do the movies "Brokeback Mountain", "In and Out" and "The Bird Cage" have in common? Yes, they're gay-themed! They are also Hollywood blockbusters screened in theatres around the globe. These successful gay movies are nothing but the exception, freaks of nature that happen every so often, with many collecting dust in their filmmaker's closet. There are many cities that love showing these movies on the big screen. Amsterdam and New York are well known for doing this! These cities have either a cinema to screen new gay premieres or scheduled showings a couple of times a month. It was really exciting; though it shouldn't have come as a surprise, that we found a Gay Cinema in Barcelona as well. This one broadcasts movies specifically targeted to the gay community. This week we will continue our exploration of Gay life in Barcelona. We started last week with our article on how to find a Gay book store in Barcelona.

Unfortunately and quite surprisingly, Barcelona isn't as far along when it comes to Gay cinema like our Dutch and American brothers. Like in our previous post on Gay Book Stores, it surprised me to find out that there is only one Gay Cinema in Barcelona (gasp!)... and it is the Arenas Gay Cinema. How is that even possible that there's only one? Especially since Barcelona has one of the most important Gay Film Festivals in the world since 2001 which attracts some of the best films from around the world highlighting aspects of the LGBTI experience! The fact is, I don't know why there is only one. A Colorful History

Arenas Gay Cinema is located close to the Barcelona Bull Ring and Placa Espanya. It opened its doors in 1928, making it one of the oldest cinemas in Barcelona. The first movies they premiered were 'The Blue Danube,' 'Amores de Ninos' (Loves of Children or Children of Love?) with Laura La Plante and 'Sombras en la Noche' (Secrets of the Night-1924) with Madge Bellsamy. The cinema was used for a bunch of variety shows. One of them was the 1930 Festival of Opera with an artist from the Theatre de L'Opera in Paris. In 1943, the cinema was renovated before it was taken over by the Balana chain. Over the years, the programming of the theatre changed and in 1960's it turned towards sexploitation films until 1990. At that time, a fire caused by the heating system damaged the building and brought the cinema to a temporary close until late 90's.