THE METRO IN BARCELONA: A METHOD TO ITS MADNESS

The Metro in Barcelona: A method to its madness

Here is some useful information and tips for newcomers to Barcelona - the metro in Barcelona, tickets and operating hours! Barcelona's modern public transport system will take you from its beaches both near and far, to all its important sites and neighbourhoods. Having lived and visited several of Europe's major cities, I am familiar with that problem we have all faced before - standing in front of a ticketing machine in bustling station, pressing an unresponsive screen, and wondering which ticket to buy while a queue of impatient locals look over your shoulder.... Hopefully this post can make that daunting situation all the more comfortable.

The metro in Barcelona is composed of several underground lines managed by Transports Metropolitans de Barcelona (TMB) and is divided into 6 zones. Zone 1 includes Barcelona's city centre. Whether you are coming to Barcelona for travel, study, or work, this should be sufficient. I personally stick to zone 1, and buy a separate ticket when traveling beyond the boundaries of Zone 1.

Currently, single tickets for the metro in Barcelona  (TMB system) and for Barcelona Busses cost €1.15 per journey. They’re handy if you’re just dropping by Barcelona as they are cost effective for up to 3 trips. If you're fortunate enough to be staying longer in Barcelona, then I would urge you to consider the following alternatives: For more information on TMB's wide range of ticketing options, please see the Transports Metropolitans de Barcelona website.

Where to find tickets:

The easiest way purchase your respective ticket is at one of the automatic vending machines located in each Barcelona metro station. The vending machines have several language settings, and if you require any help there is an assistant in most stations. Additionally, some tickets can be purchased online. Please, check out . For more information on purchasing your ticket, check out: Additionally, ensure that you take one of the metro system maps which you can find near the automatic vending machines. These can also be found online here. [caption id="attachment_1959" align="aligncenter" width="438"] 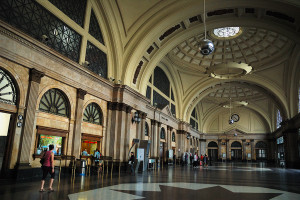 The metro in Barcelona has some unsaid rules that newcomers can easily pick-up: First of all, the metro in Barcelona has several lifts and escalators. During peak hours, they become very crowded and given how narrow they are, expect to be pushed passed during these crowded periods. So, it is best to keep to your right when on the escalator, so as to leave room for those in a hurry. Escalators will only take you to higher floors. To go down to a platform, all stations require you to take the staircase. Not a bad way to justify last night's tapas indulgences... A great thing about the metro in Barcelona is that you get phone service everywhere (if you have a working phone that is). This is mighty helpful if you get lost and need to find out which station to hop off at. Last but not least, given the number of people using the metro, PAY ATTENTION to who you are surrounded by and what is going on! Like in any public transportation system, the metro in Barcelona has its share of pickpockets.

Given the number of lines operating, most journeys will require you to change line. This is when your metro map becomes most useful. Here are a few of Barcelona's biggest transfer hubs: Other stations with great connections include: Drassanes for Las Ramblas, Gloriès, and Espanya. All are very good metro stops to then explore from. The metro in Barcelona is an experience in itself! Hopefully, you now have a method to its madness. If you or a friend is looking for a great long term flat rental in Barcelona please check out our website www.SuiteLife.es and get in touch for excellent service. Yours! A.