WESTERN UNION IN BARCELONA: GET MONEY WHEN YOU MOST NEED IT 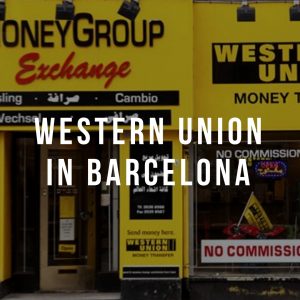 Need Someone to wire you Money ?There are places supported by Western Union in Barcelona!

Ever needed help from a Western Union to wire you money in Barcelona? It happens, especially if you accidentally lose your credit cards or if your wallet gets pick-pocketed. Unfortunately, that happens sometimes in Barcelona, but if you keep your eyes open and follow the advice of other people you will be alright. Useful webpage for that is Robbed in Barcelona. Hopefully, you won't have to experience such story! But where exactly can you find a Western Union in Barcelona and how does one go about wiring money? Read the following advice and if you ever find yourself in an emergency situation needing money, you will be well prepared!

HOW DO YOU WIRE MONEY THROUGH A WESTERN UNION?

*During this time, the information and deposit goes through Western Union's computer system. Once the money is authorized in the country that the Receiver is, the receiver can go pick it up*
Receiver: 1) Go to a local station (listed below) that is supported by Western Union. BE SURE to have your passport or a resident card. 2) Give your "numbered code" and present your identification. 3) Receive your money!!! That wasn't so hard, huh?

WHERE TO FIND A WESTERN UNION IN BARCELONA, SPAIN?

The great thing about the Western Union in Barcelona is that they also do currency exchange. So don't be in a situation where you are stranded in Barcelona with absolutely no money! Everyone knows begging for cash on the street is never a good look.
Have you ever needed to get money wired to you in Barcelona? Ever been stranded in BCN without any money? Vent it out to us! -Sam Fricker