MONTJUIC FOUNTAIN, A MUSEUM, AND A CASTLE IN BARCELONA! 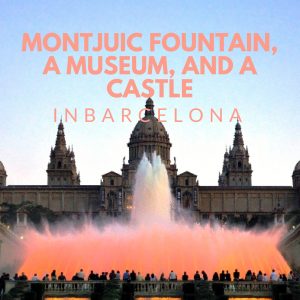 Montjuic Fountain, a Museum, and a Castle in Barcelona!

Montjuic, or the mountain of Jews as it translates, has so much to offer; The Palau Nacional is a beautiful  and imposing neo-baroque style building which offers some of the greatest views over Barcelona and houses The Museu Nacional d'Art de Catalunya (MNAC). The Barcelona Magic Montjuic Fountain Show is every bit as special as it sounds and the Venetian towers stand proud at the foot of Avinguda de la Reina María Christina which leads elegantly and symmetrically up to Montjuic. Of course, any trip to Montjuic would be incomplete without taking the funicular (or walking as I would suggest) up to Montjuic Castle which is one of the highest view points of Barcelona.

Montjuic is a relatively green area of Barcelona. Montjuic is spread over a small hill/mountain (max height of 173m) which offers many cultural attractions and fantastic views of Barcelona.

The Montjuïc castle was one of the first places I visited when I arrived in Barcelona. In my mind, it is still one of the coolest places here! Dating from the 17th century, the HUGE and clearly very powerful guns at Montjuic Castle are a strong reminder of its historical role played in the Spanish civil War, where both nationalists and republicans were executed. Castell de Montjuïc also served as a prison for a period of time, before General Franco used it for more sinister and violent purposes. Signs and written articles are situated around Montjuïc castle, telling the story of Catalan Nationalist leader Lluis Companys i Jover, who was executed there in 1940 after being extradited to the Franco government by the Nazis. Without doubt, Montjuic Castle is one of my biggest recommendations! And for photography lovers, it won't get much better than this! Also, be sure to go into the courtyard situated in the Castle itself, there is a great little cafe which offers hot and cold food and a seriously good selection of pastries, at very very reasonable prices.

Barcelona's Montjuic fountain and light show are located in the center of Plaza Espanya at the foot of  The Palau Nacional. It is a spectacle not to be missed. Originally the magic montjuic fountain was built in 1929 for the Universal Exhibition by engineer Carles Buïgas i Sans. The Barcelona Magic Montjuic Fountain show was originally intended to show the possibilities of  filtered electrical light and as incredible as it is to see now, you can only imagine how amazed the spectators were back in 1929! The Magic MontjuicFountain Show has around 2.5 million visitors per year and the operation times vary through-out the year. Barcelona Magic Montjuic Fountain Show Winter Times: (October to end March): Fountains are operational on Fridays and Saturdays from 19.00 to 21.00 Light and music shows at 19.00, 19.30, 20.00 & 20.30 Magic Montjuic Fountain Show Summer times: (April to end September): Thursday to Sunday from 20.00 to 23.00. Light and music show every 30 minutes from 21.00, 21.30, 22.00, 22.30 & 23.00

MNAC is a truly impressive neo-baroque structure, easily accessible despite it's high elevation. The terrace located at the top of the steps, just in front of the MNAC is higher than you may imagine from ground level and offers a truly impressive and comfortable way to view Barcelona. What I really love about The Museu Nacional d'Art de Catalunya, is that there is normally a musician or two at the top performing their stuff, adding to the already uber-cool atmosphere. Coupled with the comfy chairs and a coffee from the cafe, it's not hard to see why I spend most Sundays chilling out at the MNAC, taking in the Barcelona views. The Museu Nacional d'Art de Catalunya or MNAC for short, is housed in The Palau Nacional. Considered to be one of the most important centres for Romanesque Art in the world and is also the biggest art museum in Barcelona. Art fans will find exciting pieces from the 19th and 20th centuries,  the Gothic, Renaissance and Baroque Periods, it's all here!

Montjuic is also home to Palau Sant Jordi which was one of the main venues for the 1992 Summer Olympics. Nowadays, as our frequent readers will know, it's mainly used for music concerts, indoor sporting events and other cultural activities. Artists coming to the Palau Sant Jordi this year include Shakira and Harry Styles. Basically, if there are any important or big scale gigs or events in Barcelona, this is where it's going to be.

The amazing outdoor Olympic diving & swimming pool is also located at Montjuic and is open to the public from the end of June to the  start of September, however, the diving section is not open to the public. It's a truly impressive site and was chosen by Kylie Minogue for the location of her 2003 music video "Slow".

Also built for the 1992 Olympic Games, there are two outdoor Olympic swimming pools on Montjuic mountain as well as a private sports club with an outdoor pool. The Bernat Picornell swimming pool is the main pool at Montjuic with seating capacity for 4.100 spectators and panoramic views of Barcelona city. It's worth mentioning that the changing rooms have not really been maintained since the 1992 Olympics Games and are now pretty run-down. So, next time you are in Barcelona, and can't think what to do, get to Montjuic for endless fun and seriously cool stuff to see and do! Ben H - SuiteLifer and Montjuic local