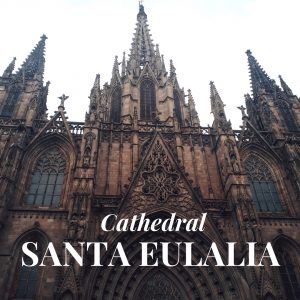 Must See in Barcelona : The Famous Cathedral Santa Eulalia

In Barcelona there are a large number of cathedrals, some more famous than others. Those cathedrals attract more and more visitors every year. This interest is, in part, due to the cathedrals' architectural style: some of which date back to the Roman Empire, while others are Gothic and some more modern like the Sagrada familia designed by Gaudi. We'd like to share one of the best; a must see in Barcelona! Did you know that one of the most famous cathedrals in Barcelona is the Cathedral Santa Eulalia de la Seu located in the highest point of the old town of Barcelona? It's the most beautiful Cathedral in Barcelona! If I were asked to choose between the Sagrada Familia and the cathedral Santa Eulalia de la Seu I would answer without hesitation: the Cathedral of  Santa Eulalia de La Seu. The Catalan Gothic cathedral dominates many buildings that are located in the old Gothic district of Barcelona with its size and its towers. At certain times, you can have access to the crypt where the sarcophagus of Saint Eulalia rests. She is the Patron saint of Barcelona and was martyrised aged 13 years old.

Barcelona's history contains many mysteries. The legend of Santa Eulalia in Barcelona, which dates back to the Roman Empire, is one of those mysteries. At age 13, shocked by the persecution carried out against Christians by Emperor Diocletian, Eulalia opposed the Governor. For this, she was sentenced to undergo 13 martyrs, one for each year of her age. Eulalia was thus imprisoned, whipped and tortured. She was forced, for example to walk on coals burned down on her breasts, and these wounds were then rubbed with stones; and she was also placed in a barrel filled with nails that was then rolled down a hill.  Her body was then covered with fleas while she was  forced to walk naked in the city to the point of cruxifiction. Eulalia was canonized in 633 and became one of the patron saints of Barcelona, where she is known as "La Laia". The "Fiestas de Santa Eulalia" ("Holidays of Santa Eulalia") are held during the second week in February in Barcelona.

The Exterior of the Cathedral

The Cathedral is huge with impressive dimensions (about 90 meters high and about 40 wide). At the entrance there is a garden located in the cloister where you can find palm trees. The cloister is the most enjoyable place to visit and a haven of peace and nature animated by the warbling of the fountain right in the entrance and the geese hooting! There are 13  geese representing Eulalia's age when she was martyrised. At the top of the fountain sits a statue of Sant Jordi slaying a dragon. Each year, the second sunday after Pentacost, locals come and put an egg on the water jet. On the left hand side, right before the entrance of the cloister, there are two gravestones of the founders of the Cathedral Ramon Berenguer and his spouse Almodia.

A sumptuous interior: The Cathedral consists of three naves, a huge organ, and there are several interior chapels and the altar. The interior consists of an imposing nave lit by large windows dating from the 15th century. The nave is flanked by aisles, with 28 auxilary chapels. Among the wonders that can be seen inside the cathedral is the crypt below the Capella Major, which contains the sarcophagus of Santa Eulalia . The cathedral also has a magnificent choir in the center of the nave, with beautifully carved stalls. The enclosure around the choir is ornamented with reliefs that tell the story of Santa Eulalia.

Please note that the visits are at very special hours with a big break in the early afternoon, so plan to visit only between 8:30 to 13:30 and 16:30 to 19:30. Have you visited this must see in Barcelona yet? Which are your favourite churches in Barcelona? Let us know in the comments below ! *Diarra,