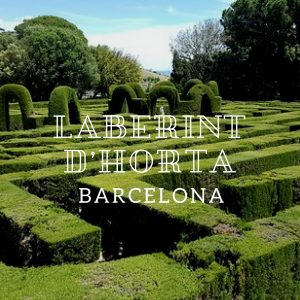 The Parc Del Laberint D'Horta – One of The Most Beautiful Parks in Barcelona!

Located a bit further away from Barcelona’s city center, the Parc del Laberint d’Horta is a must-see for all of Barcelona’s visitors. The "Parc del Laberint d’Horta" is the oldest Park in Barcelona. It consists of a neo-classical garden dating from the 18th century, which was extended to several elements of a romantic garden in the 19th century. It was given the name of the laberinto park due to it being one of the most beautiful, still existing garden labyrinths in Europe. The artful labyrinth was built right in the heart of the grounds and is, in my eyes, the most wonderful attraction in the park.

The Parc Del Laberint D'Horta and It's Surroundings

The Parc del Laberint d’horta belongs to the area called Horta, which was an independent community until 1904. Great ressources allowed good agricultural use of fruit, vegetables and wine. During the 18th century the place turned out to be a summer residence for a lot of wealthy and blue blooded people. The total size of the park is 57,07 hectares which are split up as follows: 1,92 hectares:  This is the size of the area between the Ronda de Dalt and the Palais Desvall. Nowadays, this area is home of the Velòdrom d’Horta (the Olympic cycling stadium) and a small public playground with a small cafe. 7,36 hectares:  This is the total size of the actual Parc del Laberint. 44,79 hectares: This is the size of the area which still belongs to the park, although walking is pretty hard.

How to get there: The easiest way to get there, beside a car, is to take the metro. You are looking for L3 (blue line). The station is called "Mundet" and is a few steps away from the entrance of the park. In general, the park is a must-see for all of Barcelona's visitors. It's beautiful, interesting and romantic. You can sit on the benches, relax, enjoy mother nature, and the unique surrounding buildings. Although Parc Ciutadella is pretty nice as well, the laberinto park became my favourite park in Barcelona. What about you? Have you ever been? What is your favourite park in Barcelona? Yours, Alexander Kolb