PICTURES OF BARCELONA: BARCELONETA IN PHOTOS. 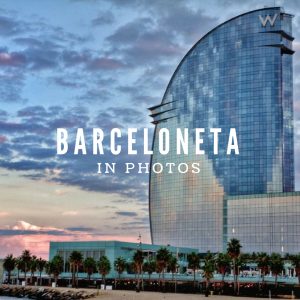 "Give me a camera, let me walk around and I will show you what you're missing in Barceloneta." - Kok Natha Hen, SuiteLifer When I first came to Barcelona, the main thing that I knew about this city is the fact that Barcelona is one of the best places to party and of course I knew about the omnipresence of Gaudi work. But the first day I came here, I discovered something more exciting : the city has some seriously atypical architecture. Indeed, Barcelona is the paradise for the camera addict and the camera lover. My favorite part of the city so far is the Gotic and El Born district where you can feel the history and the mix between the modern and the old Barcelona. You just have to walk around Barcelona to fall in love with this city, when I say walking around I mean get lost. Indeed for me every time I'm walking around this city I always choose to take all the small streets without a map so I discover some little places that are less touristic and for sure like that you will have beautiful pictures of Barcelona. So don't be afraid of getting lost in this city, you will make lots of amazing discoveries!!! For my first Barcelona photoblog, I went to Barceloneta (the most famous and touristic beach of Barcelona). I only spent2 hours over there but I succeeded in taking more than 600 pictures so I had to make a choice between all those to show you this beach that you have to see at least one time in your life. [caption id="attachment_15910" align="aligncenter" width="576"]

Longboard on the Barceloneta[/caption] Popular mean of transport in Barcelona, especially on Barceloneta Beach : the longboard. [caption id="attachment_15906" align="aligncenter" width="383"]

Sculpture on the beach[/caption] One of the numerous sculptures that you can see at Barceloneta beach. [caption id="attachment_15904" align="aligncenter" width="576"]

Spanish lifeguard on the beach[/caption] Don't worry, the Spanish Lifeguards are there to save and help you. [caption id="attachment_15902" align="aligncenter" width="383"]

Bicing Station on the Barceloneta[/caption] Go to Barceloneta by bike; you will find a Bicing Station over there. A beautiful graffiti on a surf shop. [caption id="attachment_15898" align="aligncenter" width="576"]

Bikes on the Barceloneta[/caption] You can do that too! Your pictures of Barcelona won't come by themselves. Just grab your camera (reflex or compact), take a bottle of water, wear very confortable shoes and go walk around Barceloneta for a "photo hiking"! ;-) -by Kok Natha HEN (pictures included).