BACKPACKING IN BARCELONA – IT IS POSSIBLE! 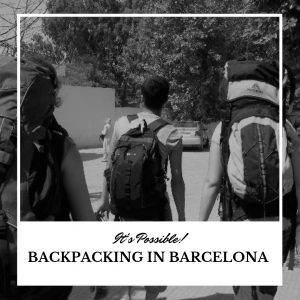 Is Backpacking in Barcelona A Good Idea ?

Backpacking in Barcelona may at first sight not seem to be something that can work well together mainly because Barcelona is perceived as being a very expensive city. While this has some truth, it is far from being a city where only those with lots of money can afford it. In fact, Barcelona is full of backpackers on Interail/Eurail tours or other backpacking trips from all over the world. Being up there on the list of obligatory places to tick off on the list, Barcelona most certainly has the infrastructure to make a stop here one of the most memorable. Backpacking in Barcelona is a really cool experience!

Check out some of our recommendations and advices on how to be a backpacker in Barcelona and make your money go further! Also check out our blog on the top 10 things to do for free in Barcelona.

As a backpacker, I am aware of the balance between seeing as much as possible within an often short timeframe. Barcelona is full of hostels and organisations offering tours and excursions. However, the majority charge around 20 Euros plus for these regardless of the type of tour and duration. But you can still have a really good guided tour of Barcelona and pay whatever you like! This is where Travel Bound Barcelona comes in......

A local travel company called Travel Bound offer free walking tour covering the history and sights of Barcelona. The tour lasts for about 2 1/2 hours and they meet up to take people on the tour every day at 11am, 1pm and 3pm. You may have noticed that I wrote FREE walking tour. This isn't a typo - it's free! Gratis! Well sort of. The tour is basically run on a tipping style philosophy. The tour sucked? You don't pay. Simple! In fact you pay whatever you felt the tour was worth. This ensures you get a good tour and you even get a free beer at the end of it at their bar - Travel Bar. You'll for sure meet some new friends and maybe even some new companions for your next destination (I did!).

Other than seeing new places and having new experiences, a really special part of the backpacking experience is meeting new people from all over the world. As with most big cities in Europe, that's on the backpacker to do list, Barcelona has an incredible expat scene where you can easily meet likeminded travellers, expats and locals. Unfortunately some bars take advantage of this and charge higher prices, but there are some which offer a really great opportunity to meet others and don't charge a lot! I've included a list of some cost effective, yet socially rewarding recommendations of meeting fellow people backpacking in Barcelona and not pay a huge price for the privelege. Let the good times roll! 1. Stoke Bar (C/Banys Nous, Barri Gotic) A personal favourite and also frequented by locals, it's reasonably cheap and always full of travellers. The owners Wendy and Omar are really cool people, who moved to Barcelona from France and decided to buy this bar. Their enthusiasm is perfectly shown in Stoke Bar and they'll not hesitate to engage you in conversation. Before you know it, you'll be chatting away to them and other people like you've known them for ages!

2. Ryan's Irish pubs Ryan's are a chain of Irish pubs all over Barcelona who are incredibly popular with foreigners and locals alike mainly because of the 1 Euro beer (get a card or 'like' them on Facebook to get this). Ryans pubs are always full and usually have something happening thanks to the huge amount of promoters and Erasmus organisations who organise get togethers for students living in the city.

There are 4 Ryan's around Barcelona at the following locations: 3. Couchsurfing For those unfamiliar with this revolution in the backpacking world, Couchsurfing is a community based site in which locals let travellers sleep on their couches for free. The philosophy is to create inspiring experiences by connecting travellers and locals who meet to share their culture, hospitality and adventures on the road or in their hometowns. But Couchsurfing is much more than just sleeping on couches. Almost every town and city in the world has a Couchsurfing community of locals who meet up and organise events for local Couchsurfers and travellers alike. For those wanting to get closer to the culture here in Barcelona, this is an incredible way of doing so and finding the best of Barcelona. For more suggestions on meeting people in Barcelona, feel free to check our blog!

We know that you could stay in Barcelona for evermore. Most backpackers in Barcelona do. In fact, that's the reason why most of us are still here to this day! But inevitably, backpacking in Barcelona means moving on to explore the rest of our beloved Spain or further afield in Europe. Many backpackers travel about using Interail and Eurail passes or use that thing we love to hate Ryanair. However, there are some other really cool ways to get about too! 1. Carpooling The Couchsurfing of car travel, Carpooling is a concept in which people can save money on car fuel by offering spare seats in their car to travellers to a particular destination. It's success has spawned a whole host of similar sites, but Carpooling is by far the most popular in Europe. By simply signing up on the site, you will see a list of advertised journeys which range from city to city within Spain and from Spain to other countries! You then simply select the trip that best matches your plans and you're away!

Naturally, this isn't for anyone but it has proved a hit with many travellers and it saves a load of money as well as having environmental benefits (less cars on the road). It's also a way of meeting people and dispelling myths of foreign drivers! From looking at the site, Carpooling is massively popular in Barcelona with pages upon pages of listings making this a viable option for moving on or arriving to Barcelona! 2. Eurolines The Interail of buses if you like and is popular with those wanting to save a bit of money. As with Interail, there are options to get a selection of passes if you're touring about. A great alternative to Interail, although it lacks the romance associated with train travel and it can take a while to reach places. In Barcelona, Eurolines buses usually depart from the Arc De Triomf station or at Sants.

Hopefully, you're now a bit more in the know on how easy and exciting backpacking in Barcelona is. Are you planning on coming here on an Interail tour? Been a backpacker in Barcelona already? We'd love to hear your experiences! - Chris